Some windows of the Egyptian Museum in Tahrir Square were broken from a car bomb explosion early Saturday at the Italian Consulate on Galaa Street, Downtown Cairo 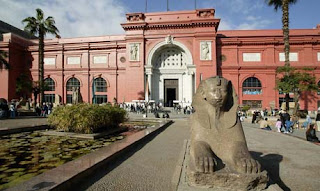 A car bomb that exploded today outside the Italian Consulate in Downtown Cairo, killing one, injuring ten and significantly damaging part of the consulate building, had a negative impact on the Egyptian Museum in Tahrir Square, located around 700 metres away.

Mostafa Amin, secretary general of the Supreme Council of Antiquities, told Ahram Online that the windows of the first and second floors of the museum were broken from the blast, but that all the museum's showcases and treasured artefacts are safe and sound.

He said that the broken windows would be removed and replaced today.

A committee is being formed to inspect the museum building after the explosion.

Mahmoud El-Halwagy, director general of the Egyptian Museum, said the windows broken are located near Abdel Moneim Riad Square. He added that the museum is open and welcoming visitors as normal.