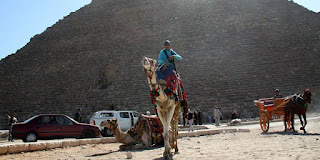 Boy rides a camel near pyramids - YOUM7
By Rany Mostafa

CAIRO: Egyptians will have free admission to museums, tombs and temples located in Luxor and Aswan during the three-day Eid al-Fitr, Antiquities Ministry said in a statement Tuesday.

“The move aims at promoting Egypt’s domestic tourism by encouraging and raising the cultural awareness of young people on the significance of the monuments they visit,” Sultan Eid, Director of Upper Egypt Antiquities Department told Youm7 Tuesday.

The ministry will celebrate this year’s Eid el-Fitr with cultural events, including folkloric music festivals and workshops for students to produce mini models for their favorite archaeological site or artifact, Mostafa Waziri, Director General of Upper Egypt Antiquities in the Antiquities Ministry told The Cairo Post Wednesday.

He added that the music festivals will be held in the Luxor’s west bank sites of the Temple of Queen Hatshepsut and the Valley of the Kings along with Luxor and Karnak Temples on the city’s east bank.

Egypt depends on tourism for around 20 percent of its hard currency. The industry witnessed its peak in 2010, with $13.8 billion in revenues, but unrest following the 2011 revolution has kept many tourists away.

In April, Egypt’s ministries of tourism and civil aviation have launched an initiative to encourage domestic tourism in an attempt to boost hotel occupancy rates, Youm7 reported.

In June 2014, following a slight improvement in Egypt’s state of security, many countries including Italy, Denmark and Belgium lifted travel warnings to the Sinai Peninsula.