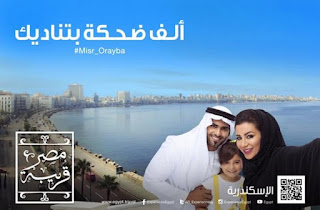 Famous for the 'Misr Wahastona' tourism promotion campaign in 2014, entourage is back in the news being the only independent Dubai based agency to be short-listed to manage a 3-year global campaign for Egypt Tourism Authority.

At the beginning of the year, the mandate for ETA summer campaign titled 'Misr Orayba' was handed over to entourage, and now it is the buzzword among Arab tourists, creating a strong inward flow of tourism interest in Egypt. There has been a widespread increase of tourists from UAE, KSA and Kuwait when benchmarked against year on year growth statistics.

Mohammed Tayem entourage's chief said, "We have delivered success over the last year for ETA and based on this success we are confident of doing well in 2015. For the first time in 3 years since 2010, Egypt's downward spiral in tourism was reversed with the 'Misr Wahastona' campaign in 2013-2014 calendar year, and now with 'Misr Orayba' we are creating remarkable recovery specially during the holiday season in the beach resorts of Sharm el-Sheikh and Hurghada in addition to introducing Alexandria as a destination.  We are focused on building on this tremendous upward movement for tourism interest in Egypt."

The campaign, created and launched by entourage is being hailed for its strong impact. Spread across the MENA, 'Misr Orayaba' delivers a message of 'home-coming' for the Arab tourist looking for an ideal summer break with family. 'Misr Orayba' means Egypt is close, and this message resonates strongly across the Middle East tourists, who feel emotionally close to the cultural and family destination experiences offered by Egypt.

Planned around a strategically balanced media blueprint, 'Misr Orayba' is capturing prominent screen space in the Middle East with massive exposure on Rotana network, MBC, OSN and Abu Dhabi TV channels. Intelligent outdoor in 9 markets, print and heavy digital placements across all leading channels are driving expected responses. The campaign video on YouTube is a major success registering more than 4 million hits within 4 weeks of its launch. Increased levels of social media engagement driven by smart social content is yet another tactic generating buzz around Egypt's tourism offerings in the MENA region.