(16) Gebel Ramlah Project Sahara is currently the... - Desert and the Nile. Late Prehistory of the Nile Basin and the Sahara

Desert and the Nile. Late Prehistory of the Nile Basin and the Sahara added 4 new photos.

January 9 · Edited ·
Gebel Ramlah Project
Sahara is currently the biggest desert in the world, covering an area of more than 9 million square kilometers. It is also one of the most inhospitable regions. For most of the last Glacial the Sahara was inaccessible to human occupation, which flourished but only in the Nile Valley. With the onset of the Holocene (about 11550 years ago), the climate became more humid, changing the desert into a savannah for the next few thousand years. The extent and character of this environment was strictly related to the climatic fluctuations specific to this zone, characterized by alternate periods of dryness and greater humidity. A distinctive feature of the natural environment of the Egyptian Western Desert (the part of the Sahara lying to the west of the Nile Valley) in the early and middle Holocene was the presence of seasonal lakes filled by rain-water fed in by numerous rivers and streams. Favorable environmental conditions were conducive to the emergence in this area of the first Neolithic pastoralists already 11,000 years ago and their development for the next 5000 years. The Neolithic occupation of the Western Desert of Egypt has been the object of research by the Institute of Archaeology and Ethnology of the Polish Academy of Sciences for the past 40 years within the framework of the Combined Prehistoric Expedition. The work in Nabta Playa, directed by Professors Fred Wendorf and Romuald Schild, has led to the establishment of a chronological and cultural systematics and a description of the economic base and significant manifestations of the production of Neolithic communities, all against the background of a dynamically changing environment. The breakthrough in our investigations came with the discovery and study of the first complex of Neolithic cemeteries known from the Western Desert in Egypt. This cemetery situated on the southern shore of the paleo-lake in the region of Gebel Ramlah (about 130 km to the west of Abu Simbel), investigated by Michał Kobusiewicz, Jacek Kabaciński and Joel Irish, has contributed significant data on the burial rites of a pastoralist community and their anthropological characteristic. The interdisciplinary research in 2001 and 2003 has uncovered altogether 33 graves on three close lying cemeteries, containing 67 individuals, mainly women. The most frequent kind of interment is a primary inhumation burial. The deceased was interred alone, in contracted position, on the right side, head to the west. There were also secondary, collective burials with several bodies being placed in a grave together, the bones in disarray. The burials were richly furnished: pottery vessels, weapons, toiletries, containers with pigments and jewelry composed of strings of beads made of shell and stone, bracelets, armbands and pendants of ivory and shell. Anthropological examination of the burials indicated a mixed population featuring sub-Saharan as well as Mediterranean traits inhabiting the Gebel Ramlah region around 6400/6300 years ago. 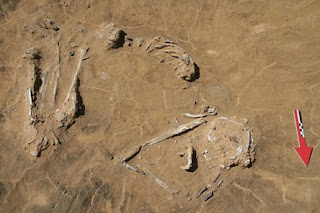 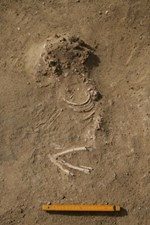