Coptic funeral chariot to be displayed at museum

Antiquities minister discovers Coptic funeral chariot in Al-Gamaliya, calls for it to be displayed at National Museum of Egyptian Civilisation 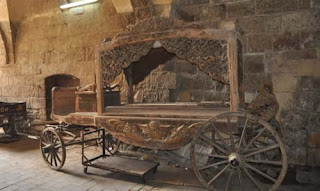 The wooden chariot dates from the 19th century.

It has four wheels (two large ones at the back and two small ones in front) and its body is decorated with foliage on a frame.

Eldamaty noticed the chariot and asked his deputy Mohamed Abdel-Aziz to start negotiations with its owner to have it put on the Antiquities List and exhibited at the National Museum of Egyptian Civilization (NMEC) in Fustat.