The reconstruction of the Second Pillared Hall of the tomb of Karakhamun is one of the goals of the 2015 season. This work has already been going on for a number of years but now with our new stonecutting machine continuously cutting blocks for pillars and slabs for walls we believe in the success of this ambitious plan. The Second Pillared Hall is the least-preserved room in the tomb of Karakhamun. Used for years as a quarry it did not have much left in situ when we finished its excavation in 2010. 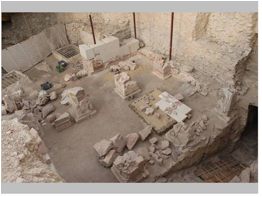 Thanks to our  epigraphers, builders, stonecutters  and incredible conservation team of 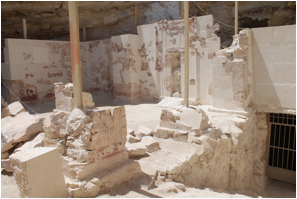 This photograph taken at the end of the 2014 season shows the remains of the pillars on the north side. The 2015 season began with the rebuilding of the pillars. 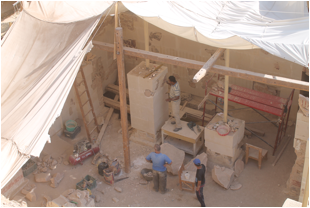 Reconstruction of the decoration of the second pillar on the north side started from the top with BD vignettes. It is conducted by Ken Griffin and our conservation team. 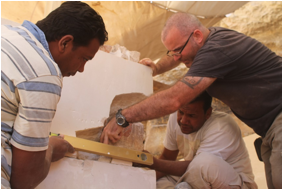 This photograph shows the beginning of the installation of the BD 57 vignette on the eastern face of the pillar. 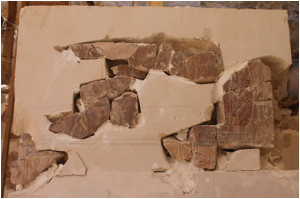 With the lower part of the figure of Hathor in a tree and streams of water offered to Kharakhamun sitting on a chair, it is almost complete.

The northern side of this pillar features a combination of two vignettes of BD 104 and BD 51. It seems that Spell 51 plays a special role in the tomb of Karakhamun as it was used four times in both halls of the tomb. As it is a "Spell for not Walking Upside Down in the Necropolis"€�, Ken Griffin suggests that this was Karakhamunâ€™s worst nightmare. This fear is completely understandable and we are happy to reconstruct the text that can prevent our tomb owner from such a misfortune.

The south wall is growing as well. We are rebuilding a section to the east of the entrance to the chapel of Karakhamunâ€™s brother, Nesamenopet. The western section of the wall is decorated with an offering scene reconstructed in 2013-2014. 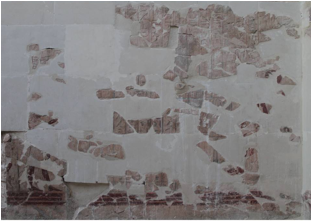 The remains of the seated figure of Nesamenopet on the bottom of the wall are the only traces of the doorframe of the entrance to his chapel found in situ.

Its counterpart on the eastern doorjamb will be reconstructed this year.

This little head was fond in 2010. All these years we saw it as a head of Karakhamun from a BD vignette or a lintel. It was difficult to locate its original place because it did not have a distinctive break pattern on the back of the stone. Its back was accurately chiselled in the manner of ancient repairs. Karakhamun's bedrock is very inconsistent even in the same layer. Patch stones were used to fill the areas of weaker stone not fit for carving.

This season the conservators were able to join this head with its body and Karakhamun lost this face to his brother Nesamenopet. 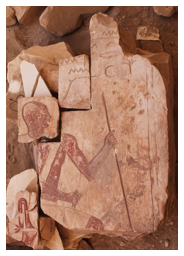 This group of fragments will shortly be installed on the newly rebuilt south wall flanking the entrance to the chapel. 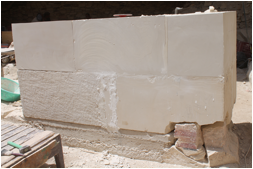 Katherine Blakeney and Ali Hassan, who reconstructed the figure are tracing it on the wall to mark where all of the fragments will go. 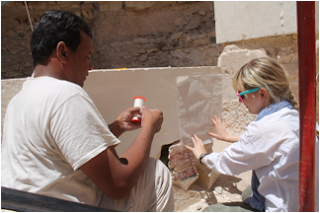