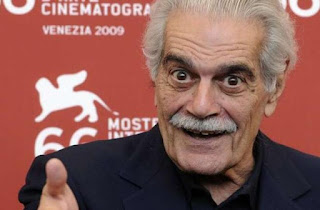 Omar Sharif died at age 83 of a heart attack. (AFP/File)

Funeral prayers for late Egyptian actor Omar Sharif were held on Sunday, in a mosque on the outskirts of Cairo, two days after the internationally acclaimed actor passed away in hospital.

Sharif died on Friday at the age of 83 and leaves behind a legacy in film, both in Egypt and abroad, having played several English-language roles in historical movies like "Doctor Zhivago" and "Lawrence of Arabia."

Sharif was born on April 10, 1932 to a wealthy family in Egypt's northern city of Alexandria, along the Mediterranean Sea.

He began acting while studying in Cairo but worked with his father in the timber business for years before realising his dream of being an actor.

Finally, in 1954, he starred opposite "the lady of the Arab screen," Faten Hamama, who one year later became his wife.

Sharif and Hamama had one son and their marriage lasted nearly two decades, before they divorced in 1974.

Throughout those years, his appearances became a staple on the Egyptian silver screen.

Sharif played the role of Sharif Ali in the British drama "Lawrence of Arabia" in 1962, starring alongside Peter O'Toole and Anthony Quinn. He was nominated for an Academy Award for best supporting actor for this role.

Sharif was the star of the 1965 drama, Dr. Zhivago, where he played the role of a doctor around the time of the Russian Revolution of 1917.

He was also the star of the 1965 movie "Genghis Khan," on the life of the Mongol emperor.

He acted alongside Sophia Loren in the Fall of the Roman Empire, Barbra Streisand in Funny Girl and Ingrid Bergman in The Yellow Rolls-Royce.

His roles in foreign film are numerous and he won three Golden Globes.

From Mexican villain, to Italian lawyer, to Latin rebel, Sharif's diverse performances over the years earned him recognition in Egypt and abroad.