The Smithsonian Does Not Archive Each and Every Tweet; But Did it Save This Egyptian Revival Facade? - Curbed Mysteries - Curbed Philly


The Smithsonian Does Not Archive Each and Every Tweet; But Did it Save This Egyptian Revival Facade? 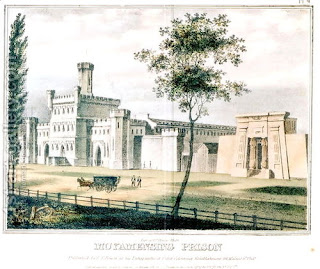 A recent fascinating article in Hidden City recently shed light on the history of Moyamensing Prison, which once stood at the corner of 11th and Passyunk where the Acme now stands. Built between 1832 and 1836, the prison housed its fair share of petty criminals and felons alike: both Al Capone and Edgar Allen Poe stayed for a night, and America's first known serial killer, H.H. Holmes, the subject of Erik Larson's Devil in the White City, was hanged at Moyamensing Prison in the 1896.

The prison, designed by Thomas Walter, was demolished in 1967, but all or part of the Egyptian Revival facade that was part of the Debtors' Apartment section of the prison may be tucked away safely in the Smithsonian for safe-keeping. 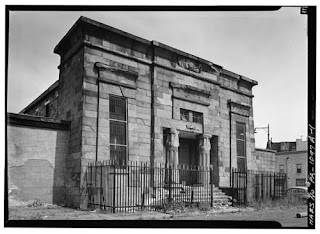 Egyptian Revival was popular in American decorative arts throughout the nineteenth century, continuing into the 1920's. And its influence cast a wide net. European architects, such as Le Corbusier and Walter Gropius, identified this type of industrial building as inspiration for the development of European modernism.

The Greek Revival facade - in stark and quirky contrast to the turreted facade of the main prison building - might just have been modeled after the Temple of Amenophis III along the Nile River. And, what's more — it may have been salvaged by the Smithsonian Institute and could be chilling out down in Washington D.C. these days.

But of course, as with the myth of the freezer full of snowflakes the Smithsonian purportedly keeps around for good measure, this could be the stuff of legend. But it's a nice thought. Philadelphians tend to be a bit protective over our facades.