A year and a half after it was endorsed by an overwhelming majority, Egypt's post-30 June constitution languishes on the shelf. Gamal Essam El-Din reports 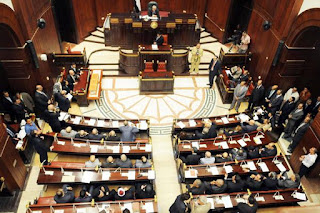 During a two-day referendum held on 14 and 15 January, 2014, 19.9 million (or 98.1 per cent of the turnout) approved Egypt's new referendum. Three million more people turned out than in the 2012 referendum on the constitution drafted when Mohamed Morsi was in power. Seventeen million people — one-third of registered voters — participated in that ballot and the Islamist drafted document was approved by it was approved by 64 per cent of them.

The overwhelming acceptance of the 2014 constitution was hailed as a major triumph of the 30 June Revolution which had resulted in the removal of Morsi and his Muslim Brotherhood regime.

"The 30 June Revolution was a popular uprising against religious authoritarianism," says journalist Mohamed Salmawy, spokesman for the 50-member committee that drafted the 2014 constitution. "This was the backdrop against which the new constitution was formulated, and informed its determination not to allow religion to be missed with politics."

"The constitution was drafted to reflect the ideals espoused by the revolutions of 25 January and 30 June. It sought to create a political system in which the president and parliament share powers, to separate the judiciary, the executive and the legislature, and guarantee freedoms."

But while some its provisions have been implemented, Salmawy concedes that "after a year and a half others still wait to be put into effect".

"The constitution paved a way to contain sectarian strife which had reached a climax under the year-long regime of Muslim Brotherhood, and opened the door to the dissolution of political parties based on religious foundations and jihadist ideologies."

"Egypt's 2014 constitution is the most liberal in the country's history," says Diaa Rashwan, director of Al-Ahram Centre for Political and Strategic Studies and a member of the constitution-drafting committee. "It rejects religious autocracy in favour of democratic rule, the peaceful rotation of power and respect for human rights and social justice".

"Unfortunately it was promulgated as Egypt was facing a wave of terrorism which erupted following Morsi's removal from office."

Radwan argues the threat terrorism posed to Egypt's internal security "is why many of the articles of the post-Morsi liberal constitution have yet to be implemented".

"The precarious security situation, coupled with a state of legal gridlock, has made it difficult to hold parliamentary elections." And without a new parliament in place, says Rashwan, "it is impossible to implement constitutional articles on human rights, the media and social justice which will require a raft of new legislation".

Mohamed Anwar Al-Sadat, chairman of the Reform and Development Party, agrees that "many of the principles espoused by the 2014 constitution on liberal democracy, the rule of the law, respect of human rights and social justice have not been implemented".

"The constitution is in limbo," he says.

Sadat, too, blames the delay in electing a new parliament for the "failure to turn the constitution's liberal platform into a reality".

Egypt's former army chief Abdel-Fattah Al-Sisi was elected as president in May 2014, four months after the new constitution was passed. Since then, says Sadat, Al-Sisi has exercised legislative power in the absence of a parliament. "The one positive thing is that the majority of the laws the president has enacted have been restricted to fighting terrorism and boosting the economy."

But many human rights organisations complain new counter terrorism laws are turning Egypt back into a police state. They cite Al-Sisi's refusal to amend a controversial protest law under which dozens of young people who led the revolution against Hosni Mubarak in January, 2011 as an example of the way legislation is being used to stifle any dissent.

"The new constitution guarantees the right to organise protests and public gatherings but stipulates this be regulated by law," counters Taha Abdel-Alim, a political analyst with Al-Ahram. "The protest law, passed before Al-Sisi came to office, was necessary to prevent Egypt from descending into chaos which might have resulted in the kind of civil war we now see in Syria."

Abdel-Alim is certain "the protest law will be revised by the coming parliament so it is in line with the rights enshrined in the 2014 constitution".

Egypt's next parliament, says Abdel-Alim, "will be instrumental in implementing constitutional articles on freedom".

"The constitution will require the passing of laws criminalising torture, discrimination and forced deportation. Constitutional articles 70 and 71 will require additional legislation to guarantee the independence of the media, eliminate censorship and abolish prison sentences in publication offences."

"The absence of parliament is not the only reason these laws have yet to be issued. Another problem," argues Abdel-Alim, "is that legislation of this type is very time consuming to prepare."

Many political analysts have pointed out that "consensus constitutions" take years to become functional.

"Constitutions are not issued for five or ten years. They must be implemented gradually, and over tens of years," says journalist and political analyst Salah Eissa.

"Constitutions that follow in the wake of a revolution against an autocrat like Morsi are drafted to radically change conditions in society. In many cases it will take years before the principles they espouse take root. It took many years for Egypt's first Western-style constitution, passed in 1924, to be implemented."

"The implementation of constitutional principles such as the peaceful rotation of power, the rule of law and the guaranteeing of citizenship rights are as much an issue of culture as law," says Eissa.

"People might vote for a constitution but when it comes to implementation they might find it difficult to accept, especially if the constitution seeks to institute unfamiliar rights."

Abdel-Alim criticises the 2014 constitution for failing to encapsulate a clear-cut economic philosophy.

"While the charter no longer describes the public sector as the lynchpin of the national economy, it also refrains from specifying the role of the private sector," he says. "This opens the door to a return of those who, under Mubarak, were happy to mix politics with business in pursuit of their own, narrow interests."