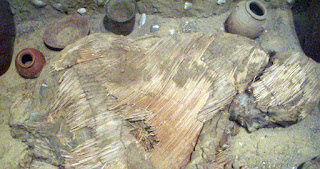 An excavation expedition spearheaded by the Institute of Archeology and Ethnology of the Polish Academy of Sciences (PAS) to an Egyptian dig site has led to the discovery of a 6,500 year old burial ground with several unique characteristics.

Research teams from the PAS have been visiting the dig site, located near the southern border of Egypt in a region known as Gebel Ramlah, for several years. While originally discovered in 2000 and subjected to study by other international teams of scientists, initial excavation work from the PAS began in 2009, revealing a large number of burial sites in the area including ones exclusive to newborn children and infants.

This latest discovery, which occurred this summer as Prof. Jacek Kabaciński from the Institute of Archaeology and Ethnology’s Poznań branch led the team’s efforts, seems to have been limited to the bodies of fully grown adults. As many as 60 new burials were unearthed and studied by the Polish archaeologists, and many of these have proven to be atypical. In one, numbered as Burial 11, there were two sets of remains laid to rest within – one of which bore strange wounds to the femur that have never been observed in other Neolithic remains in the region. Another burial had been lined with slabs of flat stone to create a primitive tomb, another unprecedented find.

Researchers also found the burial site of what could have been a person of great importance to the community they had been a part of at the time. This set of remains had been interred with numerous objects such as pottery shards, pieces of red dye, and objects made from stone. Additionally, the space above the skull was adorned with the remains of a headdress featuring the horns of a gazelle, indicating that the deceased was a spiritual leader of some importance to the community which might have relied on him or her for advice or healing rituals. Finally, the state of the remains also leads researchers to believe that in life this individual could have suffered from a bone disorder, based on numerous abnormalities in bone adhesions and evidence of repeated fractures.

Gebel Ramlah is considered a treasure trove for Neolithic remains, and has been providing archaeologists and anthropologists crucial evidence in piecing together how humans lived in the region 6,500 years ago. In fact, evidence of early attempts of dentistry were discovered in the burial ground in the form of a carved shell tooth, thought to have been placed in the mouth of a deceased community member before interring them in the ground. Other uses for the tooth could have been as decoration in a necklace or other type of jewelry, but based on the location it was found – in close proximity to three burials – the scientists surmised that there was a good chance it had been used as a cosmetic replacement.