In the grounds of a Cairo priory, a vast repository of Islam | The National 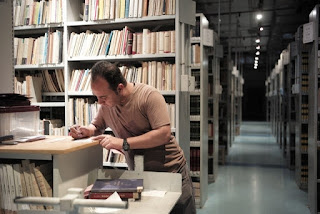 The library of the Dominican Institute for Oriental Studies in Cairo has a collection of books that has evolved into one of the leading libraries of the Middle East in the field of Arabic and Islamic culture.
David Degner for The National / June 16, 2015

In the grounds of a Cairo priory, a vast repository of Islam

In antiquity, Greek treatises were laboriously copied and recopied, translated into Syriac, a western dialect of Aramaic, and from Syriac into Arabic, in which form they spread through the Muslim societies of the Middle East and were eventually rendered into Latin.

Saint Thomas Aquinas and other prominent Dominican theologians were introduced to Aristotle through Latin translations of Arabic manuscripts. Their protégés – viewing Arabic culture as a bridge between Greek and Roman tradition – would later travel to the Middle East to research the writings of Avicenna (Ibn Sina), Averroes (Ibn Rushd) and other Islamic philosophers.

Several centuries later, within the grounds of the Dominican Fathers’ Priory in the Cairo district of Abassiya, there is a quiet haven for scholarship. A unique collection of classic Arabic texts can be found at the 155,000-volume research library of the Dominican Institute for Oriental Studies.

The institute’s collection of books evolved into one of the leading libraries of the Middle East in the field of Arabic and Islamic culture, drawing students from Al Azhar, the foremost seat of Sunni learning, and other institutions in Egypt and abroad.

A resource for researchers, academics and scholars, the library holds a plethora of books on Islamic history, theology and jurisprudence, Quranic commentary, Arabic literature, linguistics, philosophy, mysticism, the sciences, and Oriental and Coptic Christianity.

“The library is outstanding for two reasons: the books we have and the software we use,” said Friar Jean Druel, director of the institute.

Its open source cataloguing software, AlKindi (named after two philosophers: one Muslim, the other Christian), is designed for the distinctive features of Arabic culture, for example the chain of names for medieval authors and the different calendars used in the dates of ancient texts. Cataloguing is arranged in a layered, pyramidal scheme.

“It allows us to separate the work from its editorial history,” said Friar Druel, explaining how a single work may have been written down by scribes, translated, edited, printed, reprinted, annotated, abridged and manifested in varied editions.

The institute organises seminars and its scholars participate in academic collaborations and conferences.

Ahmed Abdel-Gawad, professor of veterinary medicine at Cairo University, frequents the institute’s library for a book he is writing that delves into the question of why scientific production stalled in the Arab world.

Several books are arranged on his workspace, including a bound volume of magazines published in 1952 on the history of science.

“There are traditional, regressive tendencies and there are progressive and enlightened tendencies. They are always in a tug of war. That is the problem of Arab science.”

In an office of the library, Friar Druel and several researchers work on the 200 Project, which is a European Union-funded initiative to chart the linkages of 200 authors in the medieval Islamic world.

Apart from cataloguing books, this allows an exploration of Arab-Muslim heritage by exhibiting relations between scholarly works and authors – the influence of masters on disciples, lost manuscripts mentioned in later scholarship, schools of thought, and commentary and rebuttals of major literary and political works through the ages.

The objective, said Friar Druel, is to begin visualising intellectual life – a first step in a worldwide collaborative endeavour of mapping human cultures.

Still, with 14,000 medieval authors from the Islamic world to choose from, 200 is a minuscule number.

Chleilat lives in Paris but stays in Cairo three to four months a year to advise on the 200 Project and the purchase of books for the library’s collection.

Mr Chleilat developed a passion for the scholarly texts at an early age.

He calls himself a codicologist, attached to everything to do with books, from the science of paper and ink to techniques in crafting books. He selected scholars for the 200 Project who were geographically and culturally representative of Arabic and Islamic civilisation. They include Christians, Jews and even a writer from Timbuktu.

He hopes to build on the 200 Project when it is concluded in a year’s time to investigate the convergence of ideas between Europe and the Arab world.

The idea to build a priory in Cairo came from Friar Marie-Joseph Lagrange, the founder and director of the French Biblical and Archaeological School based at the Dominican Priory of Saint Stephen in Jerusalem. It was conceived as a sanctuary for friars to research Egyptology related to the Bible.

In 1928, he sent to Cairo Friar Antonin J Jaussen, a scholar in Semitic linguistics who had conducted one of the first detailed archaeological surveys of Jordan’s ancient city of Petra.

On December 30, 1930, Egypt’s King Fuad sold Jaussen a plot of land a stone’s throw away from the walls of the old Fatimid city and the priory was built two years later. Once it was established, the Vatican asked the superiors of the Dominican Order whether they would consider creating an institute for the study of Islamic and Arabic culture, removed from any proselytising.

In 1953 Friars Georges Chehata Anawati, Jacques Jomier and Serge de Beaurecueil founded the Dominican Institute for Oriental Studies to study Islam, its doctrine and civilisation and to open a scholarly dialogue between Muslims and Christians.

Born in Alexandria to a Greek Orthodox family, Friar Anawati served as the institute’s director and later chairman until his death in 1994, researching and authoring books and articles on Islamic theology, philosophy, the history of medicine and Christian-Muslim dialogue.

Friar Jomier specialised in Quranic exegesis and contemporary Egyptian culture, writing about the trilogy of the author Naguib Mahfouz in French and introducing the work of the Egyptian laureate to a wider audience.

De Beaurecueil studied mystic Sufi tradition, including the eleventh-century Persian Sufi poet Abdullah Al Ansari, from Herat in western Afghanistan. In 1963, he gave a series of lectures in Afghanistan and was invited by the country’s monarch to stay on and teach at the university in Kabul, where he remained for the following two decades.

Extensions were made to the institute library in 1975 and 1984, when it was housed inside the priory, but more space was needed to hold the burgeoning collection. Ground was broken in 2000 for a new edifice, which was inaugurated two years later with high-vaulted ceilings, sunny reading rooms and guest rooms to accommodate visiting scholars.

Devoted to a quest for truth and knowledge, St Dominique de Guzmán, a Spanish priest, founded the Dominican Order eight centuries ago to go beyond the cloistered monastic life of abbeys by learning and teaching.

“To train them in Hebrew and Arabic, the Dominican Order established language schools in Spain and Tunis between 1230 and 1245.”

Sharing communal meals and praying together three times a day, eight friars, and a grey cat named Zadig, reside in the priory in Cairo.

Friar Druel, a French national, became a Dominican at the age of 22, the first to join religious life on both sides of his family as far back as he can remember.

At 44, he has earned four masters degrees, on top of his training in theology, including one in teaching Arabic as a second language. His doctoral study was on numerals in Arabic grammatical theory.

“We need more Dominican Brothers trained in Islamic heritage and Arabic to come and live here,” he said.

Friar Mateus Domingues da Silva has studied Arabic in Cairo for the past two years. He is returning to Brazil to begin a doctoral degree on the philosophy of the Persian Sufi sage Suhrawardi. Friar da Silva, 29, was drawn to Suhrawardi’s writings through French translation and hopes to be the first to translate his formative work, The Philosophy of Illumination, into Portuguese.

“Arabic philosophy was an important period in the history of ideas,” he said.

Friar da Silva joined the Dominican Order at the age of 21. “Study is very important to us,” he said. “It is a way of preaching, of life, of prayer.”

Friar Adrien Candiard, 32, majored in history and political science in France and contemplated a career in politics.

“I saw that I preferred to talk about God than anything else,” he said and so at the age of 23 he became a Dominican instead.

“There is a very rich theological tradition in Islam, with the particular question of what is the meaning of truth.”

Friar Candiard is embarking on his doctorate in September on the nature of truth in Ibn Taymiyyah’s multi-volume treatise, Averting Conflict between Reason and Tradition.

Ibn Taymiyyah was regularly at odds with the clerics of his time, accusing them of having an uncritical approach to Muslim science, which earned him several stays in prison.

“So let’s study, let’s see what he is saying,” said Friar Candiard. “I don’t try to study people who look like me, but the contrary, people I do not understand.”

Abdalla F Hassan is the author of Media, Revolution and Politics in Egypt: The Story of an Uprising