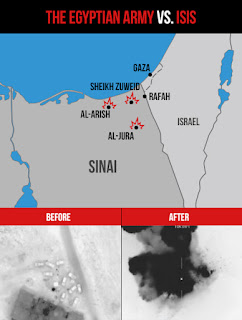 
While the worst of the battles between Islamic State militants and the Egyptian army is likely over, fighting on the ground continues on Wednesday.

The Egyptians claimed they lost "only" 17 soldiers over the past week, while killing hundreds of jihadists, and have provided a detailed map of the fighting in northern Sinai.

According to reports from Cairo, most of the fighting is now centered in the Sheikh Zuweid area, no far from the Israel-Gaza-Egypt border.

Over the past two days, the Egyptian army continued its airstrikes against the militants.

On Wednesday morning, the Egyptian army reported it killed two terrorists and arrested 13 after they were seen in central Sinai. Searches of the area where the terrorists were killed found weapons and motorcycles. 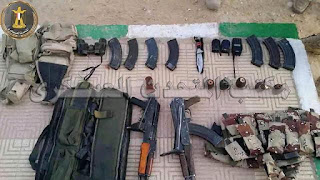 Arms seized by the Egyptian army

On Tuesday, the Egyptian army's spokesman said 241 terrorists have been killed, four wanted men and 49 other suspects have been arrested, and the army destroyed 26 vehicles and 18 motorcycles used by the militants. In addition, 16 explosives the jihadists planned to use against Egyptian troops have been destroyed, along with four of jihadists' posts in Sinai. 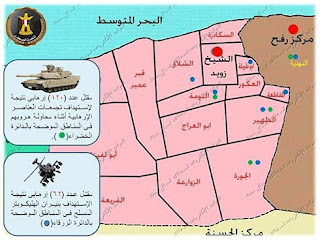 Map presented by Egyptian military to reporters, noting the areas of fighting in Sinai.

Egyptian army Spokesman Mohamed Samir told reporters that 120 terrorists were killed in artillery fire in the areas marked in the above map. Sixty-two additional terrorists were killed in Egyptian helicopter attacks (in areas marked in blue).Recent photos and videos released by the Egyptian army to the press raise the question of the nationality of the terrorists who were killed, with some in Egypt claiming there is quite a significant presence of foreign fighters in Sinai.An Egyptian official told Saudi paper Asharq Al-Awsat on Tuesday that among the killed terrorists in Sinai were dozens of foreigners.


"Initial findings show Turks, Palestinians and Syrians among the dead," he said, adding that Egyptian authorities were now working to confirm the identities and nationalities of the killed terrorists.

He went on to say that several foreigners were also arrested and taken for questioning.