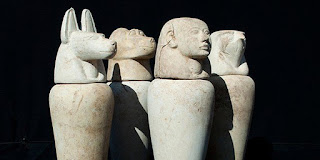 Dating back to Egypt’s Greco-Roman era (332B.C-395A.D,) the artifacts were found in a ground level apartment in Alexandria’s district of al-Wardyan, Ismaile said, adding that the artifacts were originally excavated from a 15-meter hole underneath the apartment  by three “fugitive” tomb raiders.

The artifacts include clay lamps, glass bottles and a large number of clay pots.

When the police raided the house, digging tools along with the artifacts were found while the suspects were absent, according to Ismaiel.

Most of Egypt’s major archaeological sites have been targeted for looting since the 2011 uprising toppled former president Hosni Mubarak. Thousands of ancient Egyptian artifacts, most of which were obtained from illicit digging activities, are now flooding the global markets, auction houses and electronic commerce websites.

“During the past four years, a third of Egypt’s archaeological sites have been either looted, exposed to agricultural encroachments or illegal building or experienced illicit digging,” world-renowned Egyptologist Zahi Hawaas said in a statement earlier this year.

In spite of the Egyptian government’s efforts to track smuggled artifacts inside Egypt and in auction houses abroad, the issue is still unsettled.