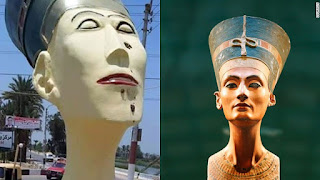 The statue of Nefertiti erected outside an Egyptian town is a far cry from the 3,400-year-old figurine on display in a Berlin museum.

(CNN)Her name refers to her legendary beauty, so when someone erected a statue to Egypt's ancient Queen Nefertiti, it probably shouldn't have attracted comparisons to Frankenstein's monster.

That's what happened in the Egyptian town of Samalut, south of Cairo, where a giant bust of the celebrated pharaoh's wife provoked so much outrage that embarrassed officials ordered its removal.

The unfortunate statue, a far cry from the 3,400-year-old elegant figurine of Nefertiti on display in Berlin's Neues Museum, became a target for online ridicule as infuriated Egyptians posted images on social media.

As the hashtag #Nefertiti began to trend on Twitter, Samalut's mayor, Jamal Qinnawi, confirmed the "ill-looking" sculpture had been removed from its pedestal at the city's entrance.

One commentator, @mazenalsarhan, tweeted: "I believe in the Pharaonic curse, and I hope it casts its spells on all of those who were involved and agreed on distorting the Beauty of all beauties #nefertiti."

Another, @BahaaBme, described the statue as "Nefertiti after her diagnosis with schistosomiasis and hepatitis C that she caught from swimming in infected lakes."

@N0urhan_Atef added: "Had she been alive, she would've died of heartbreak."

The artists behind the creation may indeed be soon feeling the pharaoh's curse.

According to the official Egyptian News Agency, the governor of surrounding Minya province has ordered an investigation into those responsible.

The controversy over the statue follows another reported indignity involving the image of ancient Egyptian royalty.

In January it was claimed that staff at Cairo's museum hastily glued the beard back onto King Tutankhamun's death mask after it was accidentally knocked off. The museum denied it.