Africa's ancient art to be saved, with your help - Africa - World - The Independent

Africa's ancient art to be saved, with your help 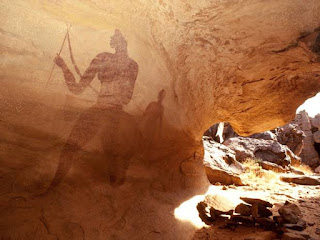 Endangered rock art up to 77,000 years old is disappearing and needs to be protected urgently

Thousands of examples of millennial old art carved into rocks and on the walls of caves are under threat as their location is often unknown and unprotected from artefact thieves.

Despite providing some of the oldest art in the world, Africa’s rock art tradition has long been overlooked by archaeologists and art historians alike.

“The Museum wants to make Africa’s rock art available to both scholars and the general public alike. We hope to both protect and share this remarkable history for free with a global

The rock art tradition began in Africa 50,000 years ago, but abstract engravings may be up to 77,000 years old. It long predates writing, so serves as an important historical window

into the culture and beliefs of early humans, and the world in which they lived. Today only a handful of isolated groups engage in the tradition, with a few sites still being used for fertility and rainmaking rituals.

The places in which ancient rock art is found have been little documented and largely unprotected, leading to a deterioration of the sites and the art itself. In 1996, TARA was set up, in order to record and protect the rich rock art heritage of the African continent.

The Nairobi-based NGO are committed to improving awareness about this tradition, and the endangered state that rock art sites are in.

“The ultimate aim is to record all this incredible heritage for humanity before it’s too late,” says David Coulson, TARA’s Executive Chairman.

TARA signed the partnership agreement with the British Museum, so that the Museum could use a digital copy of TARA’s photographic archive to educate people further about rock art. Since the sites are often fairly inaccessible geographically, and susceptible to natural and man-made destruction, the project will allow both academics and general audiences greater access to the tradition.

It will be the first time that such an extensive rock art archive will be available to the British public, and will provide one of the most complete public databases on African rock art in the world. 25,000 digital photos of sites from across Africa will be included, alongside material from archaeological and anthropological research.

The collection will include images of sites across the Fezzan of Southwest Libya, with dates ranging from 10,000 BC to 100 AD. Sites in the Messak Sattafet and the Acacus Mountains, (part of the Tadrart-Acacus trans-frontier UNESCO World Heritage site) will feature, depicting a wide range of subjects, from hippopotami to men in chariots. A survey of the South African sites will show the different styles

and subject matters of the Khoi, San and other groups of humans from thousands of years ago. As well as this early art, the collection will also exhibit engravings and graffiti by European settlers in the late nineteenth and early twentieth centuries.

In East Africa, the TARA archive will reveal geometric paintings and engravings by Twa forager-hunters as well as images of livestock, shields and clan markings made by Maasai and Samburu pastoralists in rock shelters. In these photos, ‘rock gongs’ – rocks with natural resonance once used for communication – feature prominently.

TARA have also set up a crowdfunding initiative for their organisation. To donate, click here.