Restored Qayetbay basin to be inaugurated 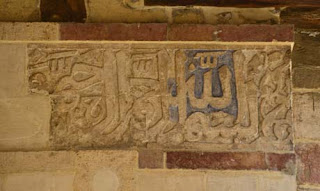 A decorative element at the entrance of the Qayetbay basin (Photo: Courtesy of the Ministry of Antiquities)

Minister of Antiquities Mamdouh Eldamaty and the head of the EU delegation in Egypt, James Moran, are to officially inaugurate the restored Qayetbay basin at the Mameluke cemetery on Wednesday.

Eldamaty told Ahram Online that the restoration project was carried out under the supervision of the ministry of antiquities and the budget was provided by the EU delegation in Egypt in collaboration with the Dutch Embassy in Cairo.

'The basin is one of the most important Islamic monuments in the Mameluke cemetery. It includes of a number of unique historical structures with great historical value," Eldamaty pointed out. 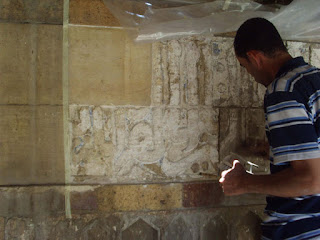 Mohamed Abdel-Aziz, deputy of the Minister of Antiquities for Islamic and Coptic Monuments, told Ahram Online that the basin is a part of a funerary and religious complex built by Sultan Qayet Bay. It was built for thirsty animals.

He asserted that the restoration work was carried out according to the latest technology. Every part of the basin was documented before the restoration started in order to preserve its original features.

Abdel-Aziz explained that the restoration included the removal of soil.  The blocks were cleaned manually and all salt removed as well as the cement surfaces found on it.

All the blocks, the walls and the foundation of the basin were consolidated while deteriorated and missing blocks were replaced with new ones of same material, shape and colour. He continued that the wooden decorated ceiling of the basin was also cleaned and restored. 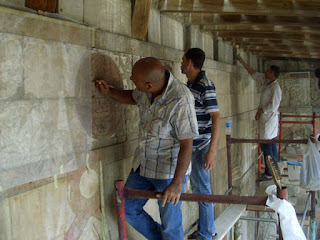 After restoration the area is to be converted into a centre for handicrafts to preserve such crafts from extinction. A selling booth is to be provided there as well as a temporary exhibition for handicrafts made by local craftsmen. 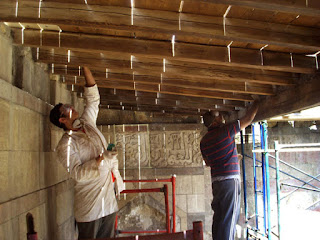