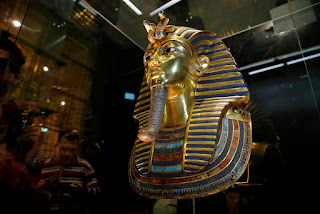 Tutankhamun's golden mask goes in for restoration - to fix the last restoration.

If you have your heart set on seeing the mask this year, avoid August.

You may remember the outcry early this year when it was revealed that the beard on Tutankhamun's golden mask had been snapped off and shoddily glued back on.

Apparently, whilst changing a light bulb in the mask's display case, the heavy mask was awkwardly handled and the king's braided false beard was knocked off. The mask and beard were originally made separately and fixed together by means of a pin, which was damaged in the accident.

Instead of the mask being whisked straight to a specialist conservation lab (like the museum's own at the new Grand Egyptian Museum), the workers were ordered to fix it quickly so that the mask would be back on display the next day. They reached for some fast-drying, incredibly strong epoxy glue.

This became a gluey mess, smeared over the polished gold surface. Naturally, people around the world were horrified.

The good news is that that German restoration specialist, Christian Eckmann, who was called in to examine the beard, said that the epoxy glue used can be removed and the mask properly restored.

Now, in August, the mask will leave it's home in the Tutankhamun galleries at the Egyptian Museum  to have the botched epoxy restoration fixed.

August is the low season in Egypt as daytime temperatures soar, and so hopefully not too many people will be left disappointed when they arrive at the Egyptian Museum, intent on seeing the king's famous golden mask.