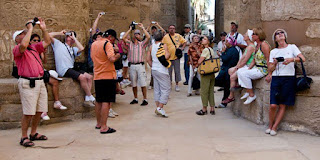 Tourists at the Luxor Temple - Courtesy of Scoopempire.com
By Rany Mostafa

CAIRO: A total of 18,440 tourists had visited museums across Egypt in June 2015, head of the museums section at the antiquities ministry Elham Salah told Youm7 Tuesday.

The number of Arabs and Egyptian who visited Egypt's museums in June reached 49,000, Salah said, adding that revenues from the entrance fees paid by Egyptian, Arab and foreign visitors to the museum in June exceeded 18 million EGP ($2.4m.)

Figures of last months were not available for comparison but Salah said though the figures are rising month after month but "they are still way behind proceeds achieved before Egypt's 2011 uprising that toppled Hosni Mubarak."

Revenues from tourism, comprising 11.3 percent of Egypt's gross domestic product (GDP), witnessed a sharp decline in the aftermath of the political instability following the 2011 uprising.

"The Ministry of Antiquities has been encountering financial problems with its total debt, which rose to 2.8 billion EGP due to the sharp decrease in its revenues," said Antiquities Minister Mamdouh el-Damaty in a statement in June.

Damaty said the ministry is currently engaged in restoration and maintenance projects of over seventy archaeological sites and museum across the country and that it is "facing difficulties to resume these projects."