FAAP is hosting a lecture cycle in São Paulo with one of the foremost specialists in Egyptian archaeology in Brazil, Antonio Brancaglion Junior. Classes will be taught on Saturdays from September to November.

São Paulo – Daily life in Ancient Egypt, people’s routines on the banks of the Nile River, their belief in rebirth and the building of statues will all be discussed in a lecture cycle to be organized by Fundação Armando Álvares Penteado (FAAP) from September to November this year in São Paulo. The extension course will be taught by professor Antonio Brancaglion Junior, one of the leading authorities in Egyptian archaeology in Brazil, and holding a post doctorate degree from the French Institute for Oriental Archaeology in Cairo (IFAO). 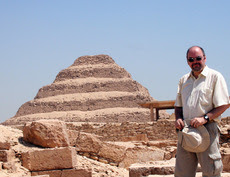 Brancaglion at the Djoser Pyramid: passionate about Egypt

The lectures will be delivered on Saturdays from 9:30 am to 12:00 pm and will begin on September 12th, focusing on Pharaohs’ statues. On this day, Brancaglion will discuss the Egyptian custom of building and worshipping statues of their gods and kings, and the techniques and materials used for making them. The topic of the second class, on September 26th, will be the day-to-day of Ancient Egyptians, life in the villages and cities, the routine of peasants, artisans and workers in general, and the figure of the Pharaoh.

On October 3rd, Brancaglion will discuss the divinities Osirus, the god of the dead and of rebirth, and Ra, sun-god and the source of life, the belief in life, death and rebirth, and the meaning of life to Ancient Egyptians. On November 7th, the course’s final class will be about mummification as a technique for preserving the bodies of humans and animals, the different types of mummies, and research into mummified animals carried out in Brazil.

According to Brancaglion, this course, which the university also offered in the first half of this year, often attracts students from FAAP and other universities, and admirers of Egyptology, the study of Egyptian culture. “I enjoy teaching extension courses; people ask different questions, it’s more fun,” the professor says. He travels to Egypt often and draws a parallel between the country today and in ancient times. “There is a certain continuity,” he says, citing habits pertaining to food, spoken language, and art.

In his courses, the researcher also sets out to debunk the image Brazilians in general have of Ancient Egypt, which often relates to mummies, pharaohs, and death. He claims that because of the movies they have watched since their childhoods, people think that Egypt as a whole is a desert, they recall mummies that come back to life, and a death-oriented society. “There used to be people, music, dancing,” says Brancaglion.

The lecturer is the director of the Egyptology Laboratory at the National Museum of the Federal University of Rio de Janeiro (UFRJ), and a professor and supervisor in the post graduate course in Archaeology at the same university, as well as the curator of the National Museum’s Egyptian collection. He also teaches Egyptian Literature at the Oriental Languages Department of the University of São Paulo (USP) and is a visiting researcher at the IFAO, among other activities.

Occasionally, Brancaglion conducts archaeological excavations in Egypt with his supervised students from master’s and doctorate courses, at a tombs complex in Luxor. He has gone on such trips at least once a year since 2013. He has lived in the Arab country, and is one of the organizers of an Egyptology week held annually at the UFRJ.

The course at FAAP arose from Brancaglion’s affiliation with the university, which began during an exhibition on Egypt featuring items from the Louvre Museum’s collection, of which he was the science curator. Ever since, the Egyptologist teaches sporadic classes on Egypt, mostly in the postgraduate program in Art History, and administers extension courses.