The Sad Story Behind Egypt's Ugly Nefertiti Statue: Nailed It 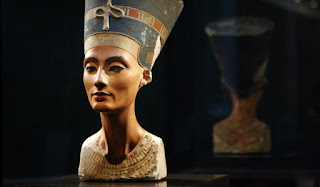 The statue of Nefertiti at the Neues Museum in Berlin. REUTERS/Fabrizio Bensch (GERMANY SOCIETY ENTERTAINMENT)

Nothing highlights the economic disparity between Germany and Egypt more than the opulent setting of the Nefertiti bust in Berlin versus the dusty lampshade under which its copy was erected in Samalut.

This week, officials removed a massive replica in Samalut of the Berlin-residing original. The copy in northern Egypt towered over the Egypt-Aswan highway at the entrance to the city. The removal came after hundreds of critics mocked the statue on social media. Some Egyptians posted tweets likening the visage to Frankenstein’s monster; others, to Egypt’s incumbent president, Abdel Fattah el-Sisi. 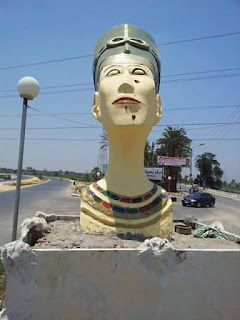 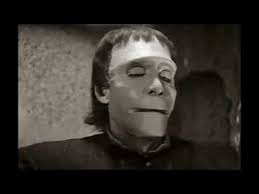 (Tweet: Keen observers: what's the difference between the two pictures?) 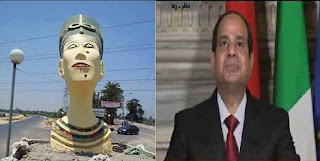 (And Again: Keen observers: what's the difference between the two pictures?)

The international community also chimed in: 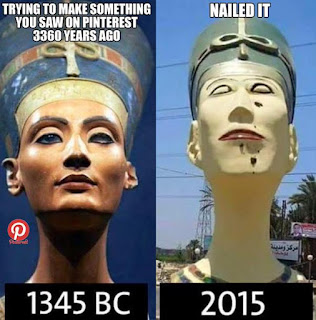 For 3,400 years, Queen Nefertiti—the wife of Pharaoh Akhenaten (14th century B.C.)—has been regarded as a great beauty. Her very name means “a beautiful woman has arrived.” But many have argued that the Samalut bust, erected less than a week ago, casts her in an unflattering light.

Outrage over the new statue may seem funny or ironic, but it reflects a real ugliness in the art world. The bust is a copy of the famous Nefertiti bust believed to have been modeled in 1340 B.C. by her court sculptor, Thutmose. The statue was unearthed in 1912 by a team of German archeologists and now rests in the Neues Museum in Berlin.

The statue is one of the world’s most controversial art objects. Since 1925, Egypt has repeatedly asked Germany to return it. According to Egyptian authorities, the Germans took the Nefertiti statue in 1913 from the North African country using fraudulent documents. In 1935, Germany considered giving it back as a political gesture—until Hitler demanded it stay. Egyptians have persisted in their requests for the statue’s return.

Four years ago, after the most recent request from the Egyptian foreign ministry, the president of Germany’s Prussian Cultural Heritage Foundation said in a statement that the country’s position regarding a return of the bust of Nefertiti is unchanged. "She is and remains Egypt's best ambassador in Berlin." German Culture Minister Bernd Neumann later argued that Germany is the lawful owner of the figure and that Egypt has no legal grounds to get it back.

The claims to cultural patrimony also come down to economics. Tourism is an important moneymaker for Egypt. According to the 2013 World Travel and Tourism Council report, tourism accounted for 11.5 percent of total employment in Egypt. Each year in Berlin, some 500,000 visitors flock to see the bust of Neferiti.

Egypt is not alone in its efforts to regain its ancient treasures. Last week, Elgin marbles protesters gathered at the British Museum in London bearing banners with the text “No More Looting.” The museum’s Elgin marbles are named for Lord Thomas Bruce Elgin, who 200 years ago snatched the sculptures from the Parthenon in Athens, Greece.

Where’s a pharaoh’s curse when you need one?