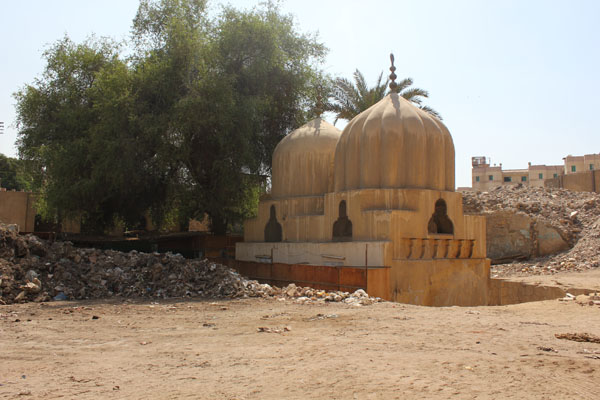 Nina Awad
Article Author
More posts by author
Islamic monuments are common throughout Egypt, specifically in Old Cairo and the Khalifa region. Both places are filled with domes and shrines built for the family of Prophet Mohammad. However, due to the fact that many of those monuments lack any legal owner, they are severely neglected.
The AtharLina Initative, meaning “our monuments,” is in the works to conserve the Shajar Al-Durr Dome which was builtin 1250 CE, as well as Mashhad of El Sayeda Roqia and the shrines of Ateqa and Jaafri. The conservation of these highly spiritual and historic monuments is expected to be complete by the end of the year.
May Al Ibrashy, AtharLina’s coordinator, said that the initiative was aimed at spreading awareness throughout the Egyptian community on the importance and necessity of preserving and protecting the significant monuments. According to Daily News Egypt, the initiative also will create a series of promotional trips across the country to reactivate domestic tourism.
“AtharLina is a three-year initiative in partnership with the Ministry of Antiquities to transform monuments to community resources that citizens keep,” Ibrashy told Daily News Egypt. “The initiative chose the Khalifa area because of its Islamic importance and because it is neglected and therefore, the initiative cooperates with the government and civil society in the development of solutions and recommendations for developing and restoring the Khalifa region.”
Ibrashy also said that the initiative was in need of funding for the “Spend Your Day In Khalifa 3″ project. The project, which seeks to raise awareness on the Khalifa region’s monuments, raise financial support and recruit partners to help develop social activities, is organized by AtharLina in an attempt to enhance domestic tourism.
Donations and funding for AtharLina’s work have previously been provided by the United States Ambassador’s Fund for Cultural Preservation. However, the initiative is still in need of more funding and therefore, the group has started coordinating with Zoomaal, a popular crowdfunding website in the Middle East. Through this crowdfunding campaign, for every dollar donated Zoomaal will donate an additional dollar.
AtharLina wants to nudge the Egyptian public to participate in conserving Egypts historic and cultural heritage by making them understand that monuments of such high value are resources instead of a nuisance.