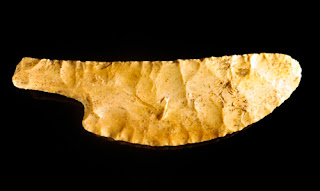 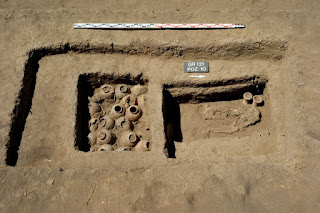 Eldamaty said three of the tombs are in a very poor condition and include child burials. Meanwhile the fourth tomb is in very good conservation condition and can be dated to the Naqada IIIC2 era.

The minister told Ahram Online that the tomb is a small mastaba with two chambers. The southern one was filled with 42 clay vessels, mainly beer jars, bowls as well as a collection of 26 stone vessels of different shapes and sizes. Some of them are cylinder and globular. A collection of 180 small carnelian beads is also among the deceased funerary collection. The corpse of the deceased was also unearthed in the northern chamber. 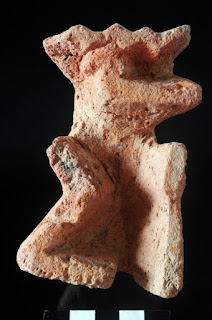 Mahmoud Afifi, head of the Ancient Egyptian Antiquities Department at the Ministry of Antiquities, pointed out that the most important discovery was the remains of a brewery with fragments of two vats surrounded with multiple clay and burned fire-dogs.

Head of the Polish mission, Marek Chlodnicki, told Ahram Online that on the eastern sand pile located on the northern and eastern sides of the Naqada III mastaba, the mission discovered the remains of two huge buildings. The first is a rectangular shaped structure, with very thick walls and a row of rooms located on the eastern side of a wide courtyard, raised in Naqada IIIA1 period.

The second is a rounded structure, located on the north-eastern slope of the sand pile, built during the second half of the First Dynasty. Chlodnicki said that the rounded structure consists of double adjacent mud-brick walls, each 95cm thick, with the interior seven metres in diameter. Close to the rounded building, a unique ceramic big stamp with hieroglyphs was discovered. 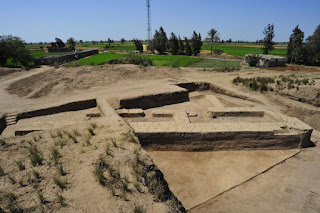 remains of the buildings