Kodak Agfa is active this Ramadan, touring from time to time in Islamic Cairo thanks to the Holy Month.
From two weeks ago I got an Iftar Invitation at Hussein Famous Quarter in the heart of Khan El-Khalil and I could not stop myself from taking my camera and take shots for everything in that historical rich area.
Luckily for me I took a couple of photos for the famous Al-Azhar Mosque’s exterior before going into the world of Khan El-Khalil and narrow passages.
Al-Azhar, Egypt’s most important and influential Islamic Sunni Institution is located in the heart of Fatimid Cairo.
You may know the current most important Sunni institution world was originally founded in 970 by North African Fatimids to spread Shiism in the world. Now Sheikh Al-Azhar declares the fight on Shiism directly in some historical irony. 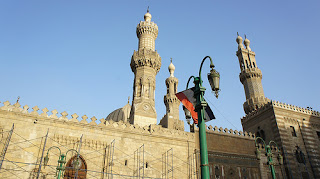 Al-Azhar is currently being renovated as you can see. I hope that the renovation is done correctly. 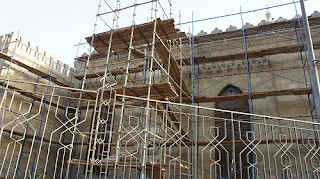 In front of Al-Azhar Mosque , there is a very interesting Mosque ; the Mosque of Mohamed Abu Dahab. Abu Dahab , the infamous Mamluk who ruled in Egypt in 18th century. 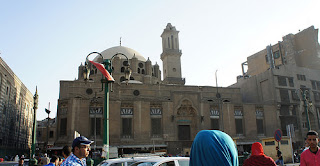 Here is a photo for Mohamed Abu El-Dahab Mosque in early 20th century, I assume. 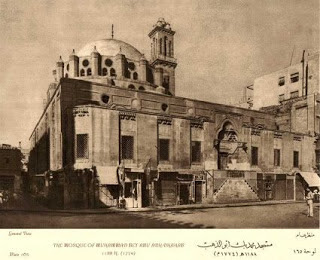 You can see the shops or rather bazaars under the Mohamed Abu Dahab Mosque now in the photos.
Here is the complete photo gallery showing Al-Azhar Mosque.
Check Zeinab Khatoun’s Café photo gallery as well.