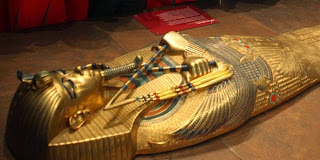 CAIRO: Archaeological sites in the west bank of Luxor, including the Valley of the Kings, are to be opened to the public at night in order to avoid high daytime temperatures.

“The Luxor governorate is currently coordinating with the Antiquities Ministry to provide an appropriate lighting system and implement required security and administrative procedures to facilitate opening the sites in the west bank of Luxor at night,” Luxor governor Mohamed Badr was quoted by Al-Wafd newspaper Tuesday.

Most of Egypt’s archaeological sites are open during the day from 7:00 a.m. until 5:00 p.m. with some including the Egyptian museum and Luxor temple closing at 7:00 p.m.

“If approved, the decision will be entered into force starting from October, Badr said, adding that the decision also aims at “diversifying the itineraries offered to the tourist in Luxor.”

According to Badr, the notion will take advantage of the Al-Gourna mountain lighting project, which was completed in 2014 at a cost of more than 55 million EGP ($8 million.)

The west bank of Luxor is the house of some of Egypt’s most significant archaeological sites, including the tomb and mummy of Tutankhamen in the Valley of the Kings, the best preserved tomb of Queen Nefertari in the Valley of the Queens, along with mortuary temples of several Pharaohs.

“We have been always calling on the Antiquities Ministry to open the west bank sites at night or at least extend their working hours so that tourists who stay a short time in Luxor can make a tour to the east bank during the day and another to the west bank during the night,” Chairman of Wings Tours Atef al-Waseef told The Cairo Post Wednesday.

The decision will have a “positive impact” on number of tourists visiting Luxor, he added.

In a phone call with The Cairo Post Wednesday, Islam Seif, a local tour guide from Luxor has praised the decision describing it as “long-awaited.”

“During summer, the temperature ranges from 45-50 C [110-120F] during the day. Most of sites at the west bank are opened with no roofs and tourists find no shade while touring the sites, which makes them cut short their visit and go back to the air-conditioned bus,” Seif said.