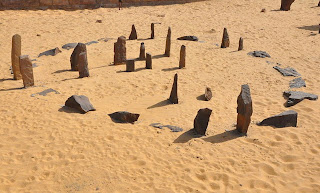 Nabta Playa and the Ancient Astronomers of the Nubian Desert

Nabta Playa is a remarkable site composed of hundreds of prehistoric tumuli, stelae, and megalithic structures located in the Nubian Desert, approximately 100 kilometers west of Abu Simbel in southern Egypt. They are the result of an advanced urban community that arose approximately 11,000 years ago, and left behind a huge assembly of stones, which have been labelled by scientists as the oldest known astronomical alignments of megaliths in the world. Some archaeologists believe that the people of Nabta Playa were the precursor civilization for the first Nile cities that arose in Egypt thousands of years later.

The ancient remains of Nabta Playa were first discovered in 1974 by a group of scientists led by Fred Wendorf, an Anthropology Professor from the Southern Methodist University in Texas, when they noticed potsherds and other artifacts sticking out of the desert sand. Wendorf made several more visits to the site during the 1970s and 1980s, each time discovering something new. But it was to be several decades before researchers discovered the dozens of stone structures that are known today, and began to realize the role and importance of these great megaliths. 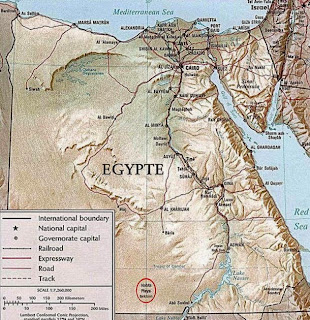 The Early People of Nabta Playa

Although Nabta Playa currently lies within a dry and unforgiving desert, it was not always this way.  Scientists have been able to determine that around 10,000 BC, a climatic change occurred over North Africa caused by a northward shift of the summer monsoons.  This change brought enough rainfall to the region to fill a number of playas (dry lakes) for at least several months of the year, and thereby support life for both animals and humans.

Archaeological evidence appears to suggest that the first settlements of people in Nabta Playa arrived between 11,000 and 9,300 years ago. Wendorf, and ethno-linguist Christopher Ehret, have suggested that the people who occupied the region at this time were pastoral nomads, who may have set up seasonal camps, moving on again when the water dried up.  People of this time herded cattle and made ceramic vessels. Although very few ceramics have been found from this time period, those that have are considered to be among the oldest identified in Africa.

Around 9,000 years ago, the settlements became larger and more sophisticated and the people built huts with fire hearths, arranged in straight rows, and started to dig deep walk-in wells, enabling them to have a year-round water supply, thus providing the conditions necessary for permanent settlement. During this time, the area was grassland and supported gazelle and hare and the people were able to survive by hunting and eating wild plants.  By around 8,100 years ago, there is evidence of domestication of animals, including goats and sheep, and the establishment of an organized labor force.

Between 8,000 and 7,000 years ago, the region suffered two major droughts which caused the water level to be significantly lowered. Nabta Playa became hyper-arid and virtually lifeless and the settlements were abandoned.  However, the droughts eventually subsided and, after a 1,000-year hiatus, groups of people began returning to the Playa. It was from this time onwards, that the region saw the arrival of a substantially more complex and advanced society and it was during this period that most of the major megalithic structures were constructed. It is considered to be the height of human occupation at Nabta Playa.

The stone structures of Nabta Playa.

Over several thousand years of habitation, the people of Nabta Playa constructed numerous megalithic monuments, including stone circles, underground tombs, huge stone slabs, and rows of stelae, which extend over about 2,500 meters.  The megalithic monuments are among some of the oldest in the world, pre-dating Stonehenge by thousands of years.

One of the most significant structures at Nabta Playa is a stone circle.  Dating back at least 7,000 years, the stone circle is among the oldest of archeoastronomical devices, designed as a prehistoric calendar to mark two significant celestial phenomena – the summer solstice, which is associated with the onset of summer rains, and the arrangement of stars in the night sky, which they used to guide themselves across the desert.

The stone circle, which measures only four meters in diameter, is made up of a number of stones, including four pairs of larger stones, and then a series of smaller stones.  In the centre of the circle are two rows of three stones. Using satellite technology, surveys by Wendorf and University of Colorado Professor, J. McKim Malville, revealed that two of the pairs align to form a north-south line, while the other two pairs form an east-west line. The east-west alignment is calculated to be where the sun would have risen and set from the summer solstice 6500 years ago. 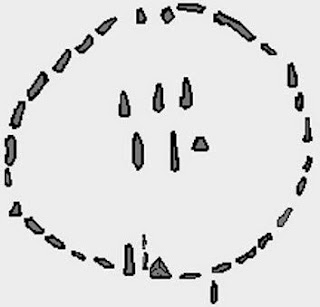 An outline of stone positions in the calendar circle. Image source: Wikipedia

Further south, there are two flat-topped knolls, which were naturally formed by the desert winds, and contained numerous megalithic structures, most of which are now clusters of broken rocks. Along the northern hill, a 600-meter long stretch of large upright megaliths was built, some of which would have weighed several tons. Malville has claimed that the arrangement of stones on the knolls were aligned to Ursa Majoris (a yellow dwarf star approximately 46 light-years away from Earth in the constellation of Ursa Major), between 6,700 and 6,000 years ago.

Coming next in Part 2: Religion, sacrifice, and the mystery of the table rocks