Residents suffer from lack of services and medical care, and isolation from basic needs 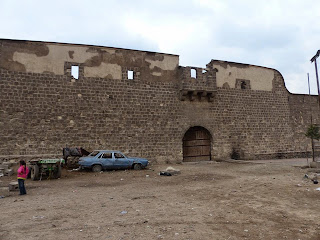 Entrance to the Gabakhana
(Photo by Leon Dubois)

In an attempt to upgrade the impoverished settlement of Istable Antar, a team of researchers from the Integrated Urbanism and Sustainable Design (ISUD) programme at Ain Shams University have begun a project that will transform the area into a cultural hub, with potentially huge implications for the its residents and the local economy.

Presently, if you had a medical emergency in the informal Cairo settlement of Istable Antar, an ambulance would not be able to perform a rescue operation as the streets are too narrow for vehicle entry.

The informal settlement is situated between a cliff-top and the highway of the Ring Road, and in the event of transporting an urgent case to the hospital, residents would have to carry the person in need of intensive care down the elevated area, cross the highway, and either flag down a micro bus or a taxi.

“If we want to go to another place we have to cross the highway road. I’ve known and witnessed a lot of people who’ve gotten into accidents on their way to the hospital,” said Hosnie Fathie, a resident of Istable Antar.

He added that there were cases of people dying in transit to the hospital, which is about 10 km, or approximately 30 minutes away, and in urgent cases like pregnancies and particular infections, simple problems can be life-threatening.

At the heart of the upgrading project is a massive Ottoman-era structure at the top of the cliff that dominates a third of the neighbourhood. The abandoned ruin, known as the Gabakhana, resembles a fortress, and was a former armoury, prison, and a horse stable in the different eras of its heyday.

Ahmed Osama, an architect and urban planner for the ISUD, plans for the Gabakhana to be rehabilitated into a cultural centre, which would potentially include a children’s playground, green area, library, and market.

Osama added the change would “attract a lot of eyes that will explore the potential in the community”.

To help make that happen, the researchers have coordinated with local groups, non-governmental organisations, non-profits, donors and members in the fields of archaeology and antiquities, as well as stakeholders in the area.

They have also signed a protocol cooperating with the Ministry of Urban Renewal and Informal Settlements. 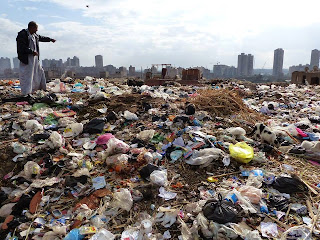 Khalid Hamad, the head of the local community association known as Al-Nour, said though there is running water and electricity, the estimated 900,000 residents are without schools, garbage pickup services, hospitals, police, and police stations.

The lack of basic services and utilities is due to its status as an informal settlement, as well as its geographic isolation, with most of the homes constructed by the residents themselves. Much of the shelter is considered unsuitable and many of the residents face eviction as they do not have permits to live in the area, said Jude Zaka, an architect and researcher for the ISUD.

It is the simple demand to ending the area’s isolation, that one of the ISUD teams will attempt to accomplish with the creation of a bus stop along the side of the Ring Road, as well as widening the busiest streets, and creating a visitors’ access ramp.

With “no legitimised public transportation” the simple changes in the infrastructure will provide chances “to enhance accessibility” and “give them back what they lack in garbage collection and fire fighting”, said Mohamed Fauzi Ragheb, one of the ISUD researchers in charge of the Ring Road project.

Goma Shakur, another resident, makes a living fishing in the Nile and then selling his catch. He said that many people are hesitant to send their children to be educated due to lack of transportation, the danger of the highway, and the distance of the school.

The Al-Nour association, which also provides schooling for children and a nursery, does not just depend on the teachers, but also on transforming the parents’ mentality, said Mervat Talaat, the association’s director. She noted: “Because the parents are not educated, they’re not able to teach their children to have education higher than them.”

“If parents think there is no benefit in school, they take the kids away to work, because it’s like throwing money into the street,” Talaat added.

Professor Mohamed Sulheen, the director of the ISUD project  said that the huge environmental challenges, along with society transformations,  and the wasting of human and natural resources  has kept the region “in a cycle of disappointment and does not help bring democratisation for the young generation”.

Salama Riad Farah and his daughter are examples of community members set to gain from the economic benefits. His daughter received her diploma seven years ago, but is still facing the prospects of Egyptian unemployment, while her father spends his day selling clothing. They live with his five other children. Another daughter of his is disabled and is in need of a walking device, the price of which he discovered is EGP 2,000.  Though he receives EGP 200 from the government, he only makes approximately EGP 22 to EGP 40 a day, and is unable to cover the cost.

Sulheen continued that the upgrading project will support “the need to create businesses”. 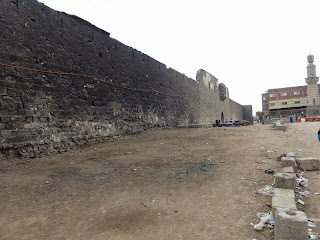 Haggana Street, which is a major thoroughfare, will also undergo participatory upgrading. The ISUD researchers believe the upgrading will motivate economic activity, as well as promote a safe and clean public space.

The redevelopment of the street is part of a plan to improve communal spaces that would include improving “existing urban structures, such as street furniture, lighting units and common bins for garbage collection”, the descriptive brief for the Improving of Communal Spaces by the ISUD said.

It continued that it would also encourage the planting of vegetation and painting stair wells, and “might also be a secondary source of income” for unemployed men and women who will carry out the continuous maintenance and upkeep.

One of the future pitfalls of the project Zada added was the possibility of gentrification due to “the sudden interest that may result towards the area”.

The result, she added, could increase rent prices and force lower-income families to leave.

Though Fatie and Salama did not express concerns regarding the technicalities of gentrification or its possible impact, their only concern is the possibility of their homes being demolished. “Please, we don’t want our homes to be destroyed,” Fatie said. “We have no other place to go.”

“The new activities could conflict with the already existing activities in the area, which might lead to conflicts between the existing residents and the new ones,” said Zada.

Hamad also voiced his scepticism and said students and organisations came to the area in the past had helped for a short time and left. “Caritas [Catholic Relief Services] and UN aid helped unemployment in the past.  They gave EGP 5 a day to clean the area, but then they stopped giving youth money to clean the areas,” he said.

Talaat added that though things were worse 10 years ago, “many [of the current] policies have not affected the area” nonetheless.

However, unlike other development projects in the past, the ISUD researchers have proposed to create something called a Local Cooperative Body (LCB). The LCB “is a self-organised local platform that seeks for community representation and self-urban management,” said Maram Sha’ban of the LCB project.

The LCB will help mobilise members of the community to “self-organise”, as well as determine and prioritise their needs, said the research team, the researchers noted in their descriptive brief of the project.

The researchers noted that most development projects in unofficial areas either had limited or unsustainable benefits, because “local dwellers are usually excluded from identifying their areas’ needs and implementations, despite being the knowledge-bank”.

Though the LCB has yet to be implemented, “a roundtable with community members from different areas in Istabl Antar confirmed to us the steps and the methodology of establishing such a body, so as in case there was any force that is interested (whether local or external), they’d know where to start”.

To promote the initiative in the area, as well and build a way to connect with locals, a kick-off event was held at the Gabkhana that included music, performances, games, and soccer matches.

Building trust, a working relationship, and sustainability with the local community was especially important, added Osama. “We’re not just academics.  We want to bridge the gap between academia and reality.”