Save Sekhemka’ may mount legal challenge to Egyptian statue sale 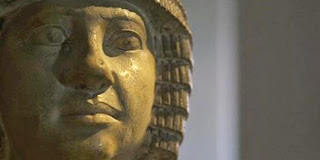 CAIRO: The Save the Sekhemka Action Group (SSAG) is campaigning for an agreement whereby the buyer of the significant ancient Egyptian statue, sold by the Northampton Borough Council in the U.K.’s Christie’s Auctions House in 2014, loans it to a major UK museum where it can be once again placed on public display.

“We will advocate the negotiation of a long-term loan of the statue to one of the UK’s major museums where it can be seen at all times by the public and where it will be cared for properly,” according to a statement issued by the SSAG Friday.

The group added that it “considers mounting a legal challenge over the sale of a 4,500-year-old statue by Northampton Borough Council.”

The auction could be illegal because of a question over the original donation of the statue in 1850, said the statement.

“Our research leads us to suggest the legality of the sale is also doubtful. The Deed of Gift of 1880 under which Sekhemka was given to Northampton Corporation by the 4th Marquis of Northampton made the gift on condition they were always on display and never sold –in either case the statue would then revert to the Compton family.  Thus Sekhemka may not even have been NBC’s to sell.”

In July 2014 the Northampton Borough Council (NBC) sold the 4,500-year-old statue of the Egyptian Royal Scribe, Sekhemka, by auction at Christie’s in London to help fund an extension to the town’s museum. The statue was sold to an unknown overseas buyer for £15.76 million ($20 million.)

The move, which was regarded by the SSAG as a “breach to the international codes of museum ethics” was followed by a temporary export bar that has been put in place while the dispute is resolved. The move also caused the Northampton Museum Services to have been barred from the membership in the U.K. Museum Association (MA) for a minimum period of five years.

The SSAG also said it will not be part of any fundraising attempt to buy the statue from the present owner “in order not to risk giving legitimacy to similar sales contemplated by other local authorities.”

The group also said it will seek to establish the legality of the sale through researching into the records in Egypt in order to ascertain whether the statue was legally exported in 1850.

It said it will also ask Arts Council England to investigate “whether Northampton Borough Council misled Christie’s as to the true ownership of the statue and whether Christie’s undertook due diligence in accepting the artifact for sale,” according to the statement.

The painted limestone statue, measuring at 30 inches high and 12.5 inches wide, belonged to a court official and scribe during the fifth Dynasty (2400 B.C–2300 B.C.) It was excavated from the Sakkara archaeological site, 26 kilometers south of the Giza Pyramids.

The statue shows Sekhemka, his wife and his son seated.