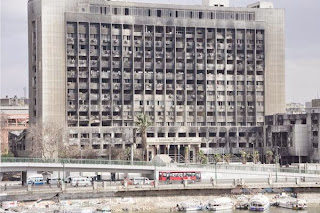 Since it was set on fire during the 25 January Revolution, the headquarters of the former ruling National Democratic Party (NDP) has become an ugly landmark on the Cairo skyline.

Such suggestions have not gone down well with curators at the nearby Egyptian Museum and the minister of antiquities as the land the NDP headquarters stands on was originally owned by the museum.
A campaign was launched to return the land to the Egyptian Museum, and after three years of struggle the museum’s director, Mahmoud Elhalwagy, told the Weekly that the Ministry of Antiquities obtained a ministerial decree in March 2014 stipulating that the land is the property of the Egyptian Museum.

Elhalwagy said that, according to documents held at the Egyptian Registry and Land Survey Authority, the land was part of the museum at the time of its construction in 1901. The area on which the NDP building was built was originally used as a dock for cargo vessels transporting antiquities down the river from Luxor, Aswan and elsewhere in Upper Egypt to the museum for restoration or display.
In 1887, a welcoming ceremony was held at the dock for the arrival of the royal mummies recovered by the then antiquities director Gaston Maspero from a secret cache in Luxor, where they had been hidden by priests during the New Kingdom.

Elhalwagy told the Weekly that the museum’s designer, Marcel Dourgnon, had constructed the gate of the museum further from the Nile River not only to establish the port but also to avoid the kind of construction errors seen at the previous Boulaq Museum, which had suffered significant damage when the Nile flooded in 1878.

Elhalwagy said that maps drawn up in 1911 and 1926 showed a bookshop and cafeteria on the land, while on the west of the site stood the museum’s workshops and storehouses.

After the 1952 Revolution, the land was sequestrated by the government from the Egyptian Antiquities Authority, now the Ministry of Antiquities, and used by various sections of the regime.
The last tenant was the NDP, which shared the large Nile-side premises with the National Council for Women, various national agencies and the Arab Bank.

Last week, a ministerial decree was issued ordering the demolition of the now abandoned and burnt-out NDP building. The job was given to the Engineering Department of the Armed Forces.

“I am overjoyed at the demolition of the NDP building. It is a real threat to the museum and its priceless collections,” Elhalwagy told the Weekly, adding that the former NDP headquarters was unsafe and could collapse at any time.

He said that the building had not been the headquarters of British intelligence, as some have claimed. The area was only called the British Army Settlement because a few army buildings were located there.

When the demolition is complete, said Minister of Antiquities Mamdouh Eldamaty the area is to be convert into an open-air museum showcasing some of the museum’s collections, now short of space in the main building. A hall for temporary exhibitions will be built in a bid to attract more visitors to the museum.

Part of the land will be turned into a garden, similar to the one built by Pharaoh Amenhotep III at the Karnak Temple in Luxor. This could be planted with papyri and lotus flowers, Eldamaty said, and a collection of ancient Egyptian artefacts exhibited in it.

A source from the Egyptian Museum, speaking on condition of anonymity, said that providing a buffer zone around the museum, instead of having it situated right next to another building, was important for security.

She said that the museum, situated in Tahrir Square, is in a “volatile environment,” though artefacts and staff can be evacuated if necessary.

“Tahrir Square is already full of hotels, and it does not need another one on land that could be used to expand the museum,” the source said, adding that the NDP building is a potential hazard to the public.

“We do not know how stable the building is after the fire that took place and the damage it caused,” the source concluded.

Eldamaty said the ministry is not prepared to discuss the demolition of the NDP building because what concerns it is the land on which it was built.

“No hotel can be built on the land instead because the ministry will not abandon this land, which is the property of the Egyptian Museum,” he said.