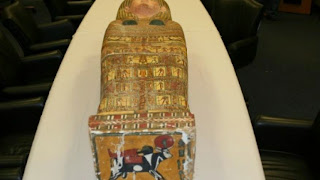 Some ancient Egyptian artifacts have returned to their rightful home. The U.S. Immigration and Customs Enforcement (ICE) recently returned dozens of illegally smuggled artifacts to the Egyptian government. The items – including a Greco-Roman style Egyptian sarcophagus – were officially returned during am April 22 ceremony at the National Geographic Society in Washington, D.C., according to an ICE press release.

“Preserving mankind’s cultural heritage is an increasingly difficult challenge in today’s society,” said ICE Diretor Sarah R. Saldaña in the release. “To think that some of these treasured artifacts were recovered from garages, exposed to the elements, is unimaginable. It is an honor for ICE to investigate these kinds of cases and to assist other countries in preserving their heritage.”

The big return was part of “Operation Mummy’s Curse,” which was a five-year undertaking by ICE’s Homeland Security Investigations (HSI). The investigation targeted an international criminal network that imported and smuggled more than 7,000 artifacts.

Some of the details of where the items were located caused waves in the world of antiquities. On Sept. 8, 2009, HSI New York found a sarcophagus from a garage in Brooklyn, New York, while just a year later, U.S. Customs and Border Protection officers tracked down a shipment of smuggled Egyptian artifacts at the Detroit Metropolitan Airport. A December 2010 shipment of smuggled goods was also intercepted and contained 638 ancient coins from various countries – 65 of those coins were returned to Egypt.

Egyptian Ambassador to the U.S. Mohamed Tawfik expressed the “heartfelt gratitude” of his country to the U.S. Department of Homeland Security and the U.S. Immigration and Customs Enforcement “for the recovery and repatriation of these priceless artifacts.”

According to the release, the ICE investigation is still ongoing. It has identified a “criminal network of smugglers, importers, money launderers, restorers and purchasers” who brought these artifacts to the U.S. The investigation traced this network back to Egypt, the United Arab Emirates, the United Kingdom, Iraq, among other nations.

“The cultural objects of ancient Egypt are iconic, and reflect the great contributions of Egyptian culture to the world,” said U.S. Attorney Loretta E. Lynch. “Today we return these venerated objects to their rightful heirs, the people of Egypt.”

So far, Operation Mummy’s Curse has been a success – it has resulted in four indictments, two convictions, 19 search warrants, and 16 seizures that total about $3 million.

The operation is part of a larger effort to return ancient antiquities to Egypt. So far, ICE has returned 80 items to Egypt in “four repatriations since 2007,” according to the release.