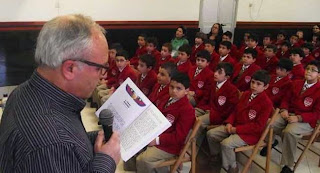 As part of its commitment to sustain literacy strategies in schools and to encourage children to read, MUT Publications Ltd. has launched a new book for children as part of its popular Sensiela Kotba Sagħtar. The book is called “Leġġendi mill-Eġittu tal-Qedem” and has been written and illustrated by Victor Pulis, with typesetting and production by Annabelle Attard. Distribution is being carried out by Matthew Falzon. This is the first book being launched by the publication house in 2015.

During a book-reading activity held at St. Aloysius College Primary School, Balzan, students had the opportunity to meet the author and to listen to a short extract of each book. The activity was also addressed by MUT Publications Ltd. Director and General Editor Charles Magro.

This book tells about 14 fascinating legends from Ancient Egypt. There are gods, kings, pharaohs, and many other characters which together went through adventures over many centuries of this now lost civilisation. These legends are known through word of mouth or through the many hieroglyphs and other inscriptions on pyramids, temples and catacombs which were found since then.

MUT Publications Ltd. was set up in February 1985 to increase the participation of the MUT in the publishing sector, to enhance the organisation of the Union's Publications Division and to help members and other authors to publish their work. The company has from time to time published books of an educational and pedagogical nature as well literature for adults. But it is the Sensiela Kotba Sagħtar, the company's imprint in the juvenile literature series, which has proved by far the most successful venture in this field. For more information and a list of currently available books for sale please go to www.mut.org.mt.