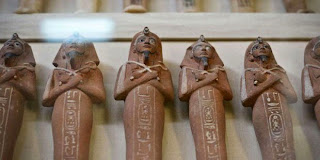 CAIRO: All stolen artifacts from the the Greco-Roman Museum’s store in Alexandria were recovered Monday, head of the central administration for antiquities Youssef Khalefa announced.

Some 47 artifacts were stolen on Saturday, including a granite statute for a man and a woman, 31 metal coins of the Greco-Roman era and 15 pots and bottles used to store perfume, Khaleefa told Youm7.

The pieces have been placed in temporary storage until the re-inauguration of the museum after restoration work is completed. The store contains some 2,500 pieces.

Earlier on Monday, eight people allegedly involved in the theft were arrested and referred to prosecution. They will be detained for four days pending investigations.

Preliminary investigations into the incident showed damages to door locks of the store as well as other artifacts were broken.

Work at the museum was halted for five years due to political circumstances following the January 25 Revolution in 2011. The Minister of Antiquities recently stated that the total repairs at the museum will cost 10 million EGP ($1.3 million.)