Okay, but somebody had to use it. I'm surprised it took them this long. Glenn

Is the recent botched restoration of the priceless funerary mask of Tutankhamun reversible? Nevine El-Aref reports 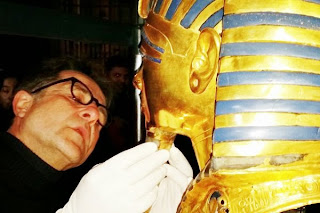 Once the brouhaha over the improper restoration of Tutankhamun’s gold funerary mask had died down, Al-Ahram Weekly sat down with German restorer Christian Eckmann for an interview. The subject: how best to repair the mask.

“I have not been appointed to restore the mask and return its blue-and gold beard to its former condition,” Eckmann said. He added that Minister of Antiquities Mamdouh Eldamaty had only asked him to examine the mask and give an opinion regarding the use of resin to reattach the beard.

“It was only a preliminary inspection,” he said. But as soon as he saw the mask, he knew that glue had been improperly used and had created a gap between the beard and the chin.

“It was definitely not the optimal way of executing such a restoration,” Eckerman said, adding that the mask is not now in danger. However, it should be properly restored, he said, since its current condition is not satisfactory.

“But this will be a second step,” he said. Before it takes place, careful examination of the mask needs to be carried out to fully understand the structure of the mask and the materials used.

It is also necessary to have a proper understanding of the construction of the beard and how it was originally attached to the mask in antiquity. Once that has been attained, it will be possible to restore the priceless item.

“From my first examination, I realised there was a small gold frame at the end of the chin that could be used to attach the beard, but the frame has only a small space to support a 2.5-kg gold beard,” Eckmann said.

A proper study of the problem could be carried out by looking at ancient Egyptian sources, reviewing descriptions by archaeologist Howard Carter in his journals and other documents, as well as photographs of the mask taken upon its discovery in 1922 that are now at the Griffith Institute in Oxford, England. X-rays of the mask would also be very helpful, he said.

“After this comprehensive understanding of the technical features of the mask and beard has been achieved, an alternative method to fix the beard can be implemented,” Eckmann said.

Studies of the resin or other means used to re-attach the beard when it was earlier restored in 1941 could also be done. This could be carried out be examining traces on the beard. The epoxy resin used in the most-recent restoration should be removed using a combination of solvents and by removing it layer by layer, until the original surface of the beard and mask has been reached.

“I think this is the best method,” Eckman said. “Although it is possible to remove the epoxy, it is a very delicate operation as it has to be done without scratching the gold of the mask.”

Eckmann told the Weekly that in his report to the Minister of Antiquities he will recommend establishment of a committee that includes experts in archaeology and conservation. These experts would then carry out the studies necessary to propose the proper restoration of the mask.

“I will suggest methods on how to correctly and professionally restore the beard, but I am not appointed myself to do the job,” Eckmann said, adding that he would be happy to do the job if asked.

Since the news broke over the improper restoration of the mask, a rumour has spread that the mask on display at the Egyptian Museum is a replica and the original one has been smuggled abroad. Eckmann dismissed the rumour, asking, “If this was so, why all that fuss over what is a replica object?”

Eckmann was previously involved in the restoration of statues of Pepi I and his son Menenre. He is now working on the conservation of parts of Tutankhamun’s chariot that were discovered last year inside a box in the Egyptian Museum in Tahrir Square.