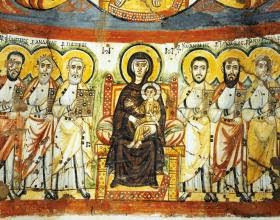 Can these remnants of Christianity be preserved?

To its immense credit, the perpetually beleaguered Coptic church of Egypt has seen fit to dedicate some resources to the study of its history. The Coptic church and two lay Coptic organizations have organized a series of symposia on Christian history and archaeology in Egypt. The latest of these was held in Aswan in southern Egypt, and we now have this collection of articles based on the symposium papers. As is usual in volumes of this kind, the articles are a mixed bag: Some concern the minutiae of scholarship, while others touch on larger issues—most notably, the history of Christian Nubia, just south of Egypt.

The northern part of the territory now ruled by the benighted Sudanese regime was once Christian, the domain of a church that celebrated its liturgy mostly in Greek and fostered Greek literacy. Sixth-century Byzantine missions played the leading role in Christianizing Nubia. During the seventh century, even as Egypt was overrun by the new force of Islam, the Nubian church shifted its allegiance, both theologically and organizationally, to a closer source: the Coptic Patriarchate in Egypt. Nevertheless, Byzantium had made a lasting impact. The Nubian church stuck with Greek rather than switch to a Coptic-language liturgy. Greek remained a prestige language, as shown by a wealth of archaeological evidence, including the discovery of tombstones inscribed with Greek epitaphs at Dongola, the capital of Makuria (the most powerful of the Nubian states, in modern Sudan).

It was Christian Nubia that delivered the first check to the conquering Muslims. Nubian warriors halted their advance up the Nile in a battle near Dongola. The result was a treaty in 652, which established the frontier between Muslim Egypt and Christian Nubia south of Aswan and north of the citadel of Qasr Ibrim in present-day southern Egypt, now an island in the lake formed by the Aswan Dam.

The Copts who found themselves under Muslim rule had an avenue of escape to the south. One who took this route was no less a personage than Joseph, bishop of Aswan, who died in exile in Dongola in 668. His funerary inscription—with some portions in Greek, others in Coptic—was discovered in 2004. Jacques van der Vliet of the University of Leiden suggests in his essay here that Joseph “as a public personality had sided with the Christian Makurians and was therefore unable to return to his see after 652.” Joseph was not the only Copt who took the road south. Qasr Ibrim appears to have become a refuge for Copts fleeing Egypt in the aftermath of unsuccessful eighth-century revolts against their Muslim rulers.

As a result, Coptic cultural influence spread throughout Christian Nubia. In 738, at Pachoras in Makuria, the monk Theophilos put the finishing touches on the decoration of his cell, which later became his tomb. He lived and died inside a Coptic book. The whitewashed chamber walls were covered with religious texts—“in square compartments like the pages of a book greatly magnified,” wrote one of the archaeologists who examined the site. As evidenced by graffiti left behind by visitors, Theophilos’ tomb and cell became a pilgrimage site, and remained one until as late as the 11th or 12th century.

North of the treaty line, Aswan became a center of Muslim power. Christian life shifted to the west bank of the Nile, centered around the now-ruined monastic complex of St. Hatre. Van der Vliet refers to St. Hatre as “a center of supra-regional importance.” Nubian monks from the south resided there alongside their Coptic brethren, some of whom came from as far north as Middle Egypt. A Coptic-language graffito, dated 1404, was found in a section of the monastic church that should have been reserved for clerics; apparently, by that time, the church was no longer used for services.

A smaller monastic complex existed nearby at the site called Qubbat al-Hawa, where monks occupied ancient rock-cut tombs. One of the cells at the site records a pivotal event. A painted inscription mentions the sack of the Nubian stronghold of Qasr Ibrim in 1173 by Shams al-Dawla, the brother of Saladin. This was the beginning of the Islamization of Nubia, although the process was a long one: The last Christian petty state held out until the late 15th century.

Both St. Hatre and the remains at Qubbat al-Hawa are deteriorating. In 1998, Egypt’s Supreme Council of Antiquities cleared away debris at the latter site, uncovering several previously concealed wall paintings. For some unexplained reason, though, the paintings were left exposed to the elements, with predictable results. In his contribution to the volume, archaeologist Howard Middleton-Jones describes “a noticeable decline” in the condition of the paintings. The looming threat to this and other Coptic heritage sites motivated Middleton-Jones to create a 3-D computer model of the monastic church of Qubbat al-Hawa in its heyday. “The ultimate aim,” he writes, “is to ‘capture’ the site and to freeze a moment that otherwise may be lost to the ravages of time.”

Coptic Christianity survives in Aswan, though not without difficulties. Metropolitan Hedra, the Coptic hierarch who hosted the symposium, contributes an interesting article about the modern Coptic community in southern Egypt, centering around the struggle to build a new cathedral in Aswan. The cathedral was dedicated in 2000 and is apparently the second-largest in Egypt. On the other hand, other parts of the diocese of Aswan have not fared so well.

Three articles describe aspects of the Coptic past in the city of Edfu, which lies on the Nile, north of Aswan. In 2011—a year after the symposium—Copts in a village near Edfu attempted to renovate their dilapidated church of St. George. Local Islamists demanded that the rebuilding stop and that the dome of the structure be removed. When the Copts balked at this last demand, a mob burned down the church and sacked the homes of nearby Christian families for good measure—just one of a wave of assaults against the Copts in recent years.

One might feel tempted to suggest that Howard Middleton-Jones expand his project to encompass the creation of an entire virtual Coptic community, on the grounds that insubstantial Christians are the only sort Islamists seem willing to tolerate.