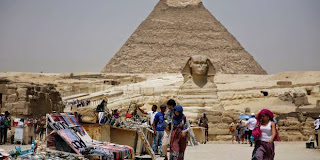 He added that the number of German tourists reached 92,500 tourists during last March, which is an increase by 28% compared to the same month last year.

Hegazy said that the increase came after the successful Egyptian participation in Berlin Stock Exchange.

According to the Central Agency for Public Mobilization and Statistics (CAPMAS), Germany was the second largest market for tourism in Egypt after Russia in 2014.

German tourists visiting the Red Sea resort cities in Egypt increased between 50-60 percent during the period between January and September 2014. Their number exceeded 1.2 million tourists in 2010.

Following a deteriorating security situation in Egypt following the dispersal of the Rabaa al-Adaweya in August 2013, tourism has suffered as the number of holiday makers decreased. Germany, along with 15 other European countries, issued a travel warning to its citizens to avoid the Sinai Peninsula in February 2014 following the bombing of a tourist bus in Taba that killed three South Korean tourists and their Egyptian driver.