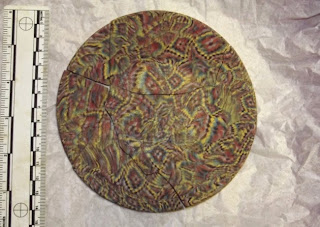 One of the smashes but complete mosaic glass dishes from Alexandria, Egypt.

A “unique find” of Egyptian mosaic dishes and Roman jugs, glass bottles and a bronze dish dating back to 200 AD have been discovered in a farmer’s field near Royston. 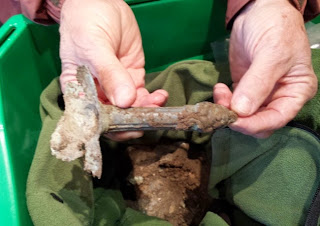 The archaeological finds form part of a cremation burial – probably of a wealthy individual - that were found by metal detectors in a field in Kelshall.

North Herts District Council is now trying to raise funds to buy the objects to display in its new museum when it opens next year.

The collection has been called a “unique find” in Britain and some of the glass dishes are thought to have been made in Alexandria, Egypt in 200 AD.

The first thing to set the metal detectors off was a complete roman jug, followed by a bronze dish and two other jugs.

Realising this was an important find it was reported and Keith Fitzpatrick-Matthews, North Herts District Council’s archaeology and outreach officer investigated further.

He told the Royston Crow: “We get members of the public bringing in things to us at the museum service all the time, but it is never usually anything quite as nice as this.”

After a second dig was launched glass bottles, an iron lamp, wall mounting bracket, hobnails from a pair of shoes and a box with bronze corner bindings were also unearthed.

These were followed by two shattered, but otherwise complete, mosaic glass dishes and a decayed wooden box which held two broken clear glass cups and a pair of blue glass handles.

The largest glass bottle was hexagonal, and contained cremated bone and a worn bronze coin dating from about 174 AD. A rare octagonal bottle stood next to it.

The objects were found late last year and are currently owned by the farmer and the finder.

There are now plans to get the bone specially analysed to see if more information can be gathered about the artefact’s owner.

Keith said: “After 1800 years, finds like these still impress us with their workmanship.

“The mosaics are just incredible and they are very, very rare, nothing like them has ever been found in Britain before.

“I have never seen anything like them in my life before and everyone on the dig got very excited.

“We want to try and raise the money to put them on show, if we can’t they will go to auction and anyone could buy them.

“They will probably then disappear into a private collection and never been seen again.

“I really don’t want them to go outside of North Herts - that would be a disaster.

“I think you can only really call it a discovery when it is on show for everyone to see.”