The mystery of the collapse of Late Bronze Age civilization bedevils archaeologists. One, Eric Cline, is positive: The devastation wasn't due to a single cataclysm, but to a harmony of events – and it could happen again. 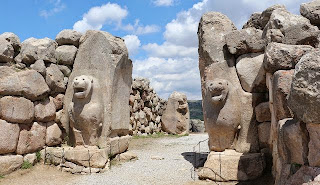 The Lion's Gate at Hattusa, capital of the Hittites - which was destroyed in the mysterious evaporation of civilization 3,200 years ago. Photo by Bernard Gagnon, Wikimedia Commons 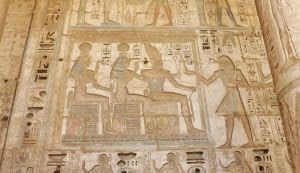 Sometime after 1200 BCE, civilization collapsed, and a dark age prevailed.

The Late Bronze Age collapse of societies throughout the Levant, the Near East and the Mediterranean some 3,200 years ago has been a mystery. Powerful, advanced civilizations disappeared, seemingly overnight. Now an archaeologist believes he has figured out what lay behind the cataclysm.

The trigger seems to have been the invasion of ancient Egypt in 1177 BCE by marauding peoples known simply as the “Sea Peoples,” as recorded in the Medinet Habu wall relief at Ramses III' tomb. The relief depicts a sea battle (and also carts full of supplies, women and children, something that always puzzled researchers. Why would the women and children have been at a sea battle, and why were there chariots? Did they bring them on ships as well?) The foreigners were depicted wearing distinct head gear.

The narrative states that Ramses III’s army and navy managed to defeat them, but Egypt was never the same. It slid into a decline – and so did its neighbors.

This collapse was apparently very sudden: a line of advanced and powerful cultures collapsed like a row of dominoes, says Eric Cline, professor of classics and anthropology and Director of the Capitol Archaeological Institute at George Washington University. 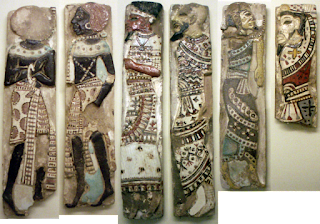 Down into chaos went the Egyptians and the Babylonians. The Aegean civilizations of the Minoans and the Mycenians descended into a Dark Age. Peoples who had an advanced writing system, seemed to have forgotten it. In fact some scholars suggest that the events described in the Iliad, such as the destruction of Troy and the Odyssey pertain to this period.

Hattusa, the capital of the Hittite Empire in the late Bronze Age (found south of the Black Sea, in modern Turkey) and its surrounding towns were burned to the ground and abandoned. Gone were monumental architecture, writing systems, pottery types and familiar settlement patterns. 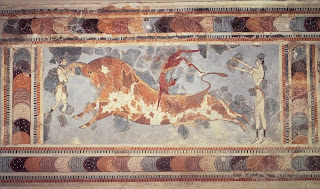 A fresco at the Minoan site of Knossos, showing the sport of "bull leaping"; the red-skinned figure is a man and the light-skinned figures are women. Photo: Thomson Wadsworth, Wikimedia Commons

A desperate letter: The enemy is here

Archaeologists find all sorts of destruction events attributed to this time. Almost every Anatolian site from that era shows signs of violence and abandonment.

Ugarit, a port city in ancient Syria that traded with the Hittites and with Egypt, was famously destroyed. In a letter, Hammurabi, the last king of Ugarit, beseeching the king of Alashia (in Cyprus) for help, writes: “My father, behold, the enemy's ships came (here); my cities(?) were burned, and they did evil things in my country. Does not my father know that all my troops and chariots(?) are in the Land of Hatti, and all my ships are in the Land of Lukka?...Thus, the country is abandoned to itself. May my father know it: the seven ships of the enemy that came here inflicted much damage upon us.”

Almost all the main coastal sites of Canaan, including Gaza, Ashkelon and Ashdod, Akko and Jaffa, were leveled. Inland sites such as the palace at Megiddo were burnt to the ground. The impressive ancient cities of Hazor and Lachish were completely destroyed and left abandoned. 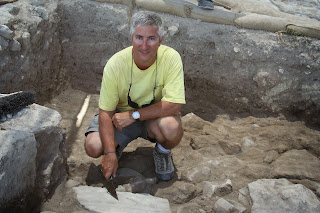 Eric Cline: No single cataclysm is likely to underlie the end of civilization in 1,177 BCE, but a 'perfect storm' of events.

“The thriving economy and cultures of the late second millennium BCE, which had stretched from Greece to Egypt and Mesopotamia, suddenly ceased to exist, long-used trade routes were abandoned, along with writing systems, advanced technology, and monumental architecture,” writes Cline in his best-selling book, "1177 B.C., The Year Civilization Collapsed."

A common element of the imploding civilizations in the second millennium BCE is that they were all interconnected.

"They interacted with each other, had trade and diplomatic contacts, arranged royal marriages, international embassies, economic embargoes, and so on," Cline says. "One of the ties between them was the need for both copper and tin, in order to make bronze, which was the primary metal of the era. Most of the copper came from Cyprus; most of the tin came from Afghanistan, as did lapis lazuli. Gold came from Egypt. Both raw materials and finished goods were sold, as well as exchanged at the royal level.”

No question, the raids of the “Sea Peoples” were a menace. But a collapse of such magnitude could not have come about due to them alone, or to any single development, Cline argues: it could only have been due to a “perfect storm” of events.

Recent high-resolution pollen analysis of a core taken from the Sea of Galilee, by Dafna Langgut and Israel Finkelstein of Tel Aviv University and Thomas Litt of the University of Bonn, has irrefutably shown that the years between 1250 BCE- 1100 BCE were the driest seen throughout the Bronze and Iron Ages. This corroborates with the information from clay tablets found in Afek in Israel, Hattusa in Turkey, Emar in Mesopotamia, and Ugarit in Syria, that record a terrible drought, and the resulting difficulties attributed to it. 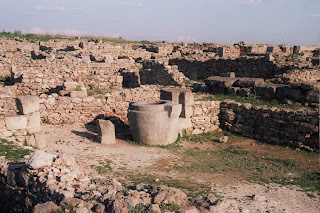 “There is evidence in the archaeological record of climatic changes such as climate change, drought (resulting in famine), earthquakes, invasions and internal rebellions at this time. Normally if a culture is faced with just one of these tragedies, it can survive it, but what if they all happened at once, or in quick succession?” asks Cline. “It seems that this is what happened between about 1225 BCE and 1175 BCE, and I think that the Late Bronze Age civilizations were simply unable to weather the 'perfect storm' and came crashing down.”

If it happened once

The world of the Mediterranean and the ancient Near East during the Late Bronze Age was obviously not nearly the size of our interconnected world today. "However, they were as interconnected in their own way as we are today, and they were as dependent upon copper and tin to make bronze as we are dependent upon oil for our automobiles,” Cline says.

He for one sees a clear warning in these events that happened thousands of years ago. Now as then, the world seems to be standing on a precipice.

“I would argue that the civilizations of the Mediterranean and the ancient Near East were so interconnected ... that when one collapsed, it affected the others, so that one by one they fell, like a chain of dominoes," he says. "The fact that similarly-intertwined civilizations collapsed just after 1200 BCE should be a warning to us; if it happened once, it can happen again. Even with all of our technological advancements, we are not immune," Cline says.

In any case, don't blame the “Sea People”. They were also victims, obviously fleeing something; looking for a better home where they could survive. They are more of a symptom than the cause of the collapse, says Cline.

If anything perhaps we should identify with them. “We are currently facing the very same type of situation that they faced back in 1177 BCE -- climate change, famines, droughts, rebellions, earthquakes. The only thing missing from today's scenario are the Sea People -- the mysterious invaders from overseas," he says.

Not convinced? Look at the region. The Greek economy is in shambles and has been for a while now, Cline points out. Internal rebellions have shaken Libya, Syria, and Egypt, with outsiders and foreign warriors fanning the flames, and Turkey and Israel are terrified of becoming involved. "Jordan is overcrowded with refugees. Iran is bellicose and threatening, while Iraq is in turmoil… The same descriptions fit the situation in 1177 BC,” Cline points out. And next door is the failed state of Somalia, some of whose sons took to the seas themselves, as pirates.

Maybe, Cline suggests, ISIS are a sort of latter-day Sea People, bursting into the void created as the world collapses around them, causing mass migrations of large groups that destabilize the lands to which they flee.

In short, modern man, be not proud. "Every society in the history of the world has ultimately collapsed," Cline points out. "We should be thankful that we are advanced enough to understand what is happening and to take steps to fix things, rather than simply passively accepting things as they occur.”