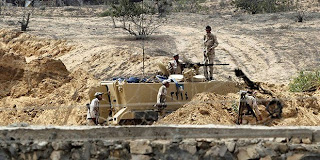 CAIRO: A soldier was killed in Rafah, North Sinai after he was shot by an unknown persons; the 22-year-old died Monday afternoon, Youm7 reported.

On Sunday, 15 security forces conscripts and officers were killed in attacks by Ansar Bayt al-Maqdis in Arish, six of whom in an explosion that targeted a military vehicle and the rest in a suicide bombing at Arish police station. Civilians were injured and private properties were damaged in the bombings.

Hundreds of soldiers have been killed in North Sinai since the 2013 ouster of President Mohamed Morsi, as well as dozens of civilians for allegedly aiding the military with information.