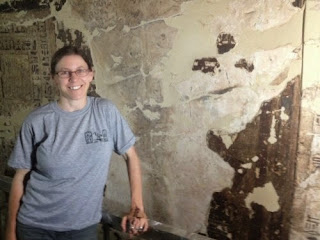 Dr. Shirley will speak about Ancient Egyptian Tomb 110 and its owner, Djehuty, as well as her recent work in this tomb. The tomb and its owner are fascinating and important to understanding the political history of the mid-18th Dynasty and the reigns of Pharaohs Hatshepsut and Thutmose III.

Tickets are $10 and available at the door or online at www.aharts.org.

From Ancient Construction to Modern Preservation: The Story of Egyptian Theban Tomb 110

Of the more than 600 non-royal tombs located in what is today called the "Theban Necropolis" on the west side of the Nile in Luxor, few are as intriguing as "Theban Tomb 110," dated to the 18th Dynasty of the New Kingdom, the best known ancient Egyptian dynasty, c. 1543–1292 BC. 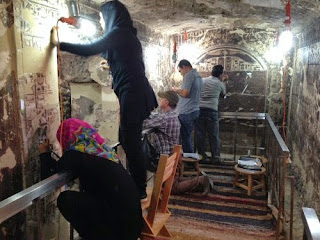 This was the period in which ancient Egypt reached the peak of its power, and was ruled over by famous pharaohs including Hatshepsut, the longest-reigning woman-pharaoh; Akhenaten, the "heretic pharaoh," with his queen Nefertiti; and Tutankhamun, the boy-king.

Tomb 110 belonged to a man named Djehuty, who served as a royal butler and herald for two kings: the powerful queen-turned-king Hatshepsut, and her stepson and successor Thutmose III. Djehuty's tomb was discovered and superficially published in the 1930s by one of the great early Egyptologists, Sir Norman de Garis Davies. But, the tomb was lived in during modern times, and completely blackened by fires, so Davies could not discern many of the inscriptions and scenes.

In 2012 it was chosen by the American Research Center in Egypt (ARCE) as the perfect tomb in which to introduce an archaeology and conservation field school for Egyptian archaeologists. Over the past three years ARCE's conservation project within the tomb has consolidated the tomb walls and cleaned its pillared and transverse halls.

In addition, their archaeology project has carefully excavated the previously buried courtyard and entrance, as well as the interior pillared hall, burial shafts, and portions of the chambers attached to one of these shafts.

Training Egyptians to preserve and document their heritage through "field schools" such as these encourages Egyptian investment in their own history, and builds relationships between US and Egyptian scholars.

This talk will first take you on a journey through the construction and decoration of New Kingdom tombs, before focusing specifically on Djhetuy's tomb. With the walls now cleaned and consolidated, it has become possible to re-record his tomb scenes and inscriptions, a process known as "epigraphy." The Egyptian students of the current epigraphy project in Theban Tomb 110, funded by ARCE through a USAID grant, have already brought to light new information about the tomb's construction, the tomb owner, and the kings whom he served.

Since 2007 she has been the Managing Editor for the Journal of Egyptian History, published by Brill, since 2011 has been the VP of the ARCE-PA Chapter, and for the past three years has served as the ARCE National Chapters Council President.

Dr. Shirley has authored several articles, most recently a contribution on Second Intermediate Period and 18th Dynasty administration for the book Ancient Egyptian Administration (HdO 104), and an article on the officials who served under Hatshepsut and Thutmose III for the Theban Workshop publication Creativity and Innovation in the Reign of Hatshepsut (SAOC 69).

She has participated in several archaeological projects in Egypt and Syria, and has just begun a new project to document and record the tomb scenes and inscriptions in Theban Tomb 110, which belonged to the royal butler and royal herald Djehuty, who served both Hatshepsut and Thutmose III.

Thank you to our sponsor MedExpress for its generous support.

The AHAC is a registered 501(c)3 non-profit organization. The mission of the Atlantic Highlands Arts Council is to strengthen community through the arts. For further information on the Arts Council, visit aharts.org.

This program is made possible in part by Monmouth Arts through funding from the Monmouth County Board of Chosen Freeholders and the New Jersey State Council on the Arts.