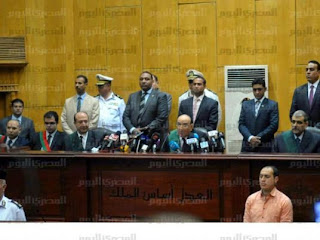 Reuters
Ousted president Mohamed Morsi once dreamed of creating an "Egyptian renaissance with an Islamic foundation". That seemed more unreachable than ever on Tuesday after a judge sentenced him to 20 years in jail for violence, kidnapping and torture.
President Abdel Fattah al-Sisi, the army chief who ousted Morsi in 2013 after mass protests against his rule, has repeatedly portrayed his Muslim Brotherhood as a terrorist group which poses an existential threat to Egypt.
That message was well received by many Egyptians whose desire for stability made them turn a blind eye to Sisi's subsequent crackdown on Morsi, his supporters and other Brotherhood leaders. It was the toughest in Egypt's history and about 800 protestors died.
Morsi, 63, has only been seen in televised snippets from court sessions since his detention in 2013 and other leaders of the Middle East's oldest Islamist group are all behind bars.
The Brotherhood never imagined it could rule Egypt -- until the 2011 uprising that toppled veteran autocrat Hosni Mubarak paved the way for Morsi to be declared Egypt's first freely-elected president. Some argue the decision to seek the presidency was a miscalculation.
While the Brotherhood was effective underground, it seemed overwhelmed by the challenge of managing about 90 million Egyptians who made the same demands that led to the fall of Mubarak after three decades in power.
Morsi was the public face of that failure. Some Egyptians accused him of abusing power and neglecting the economy, allegations the Brotherhood denies.
Rumors that Morsi intended to give part or all of Egypt's Sinai Peninsula to the Palestinian militant movement Hamas also created a permanent cloud of suspicion around him.
Sisi, who was Mubarak's head of military intelligence, stepped in during the street protests, announcing to the nation in mid-2013 that the army would take charge and pursue a roadmap to democracy.
Hundreds of Morsi supporters were shot dead at a Cairo protest camp and thousands of others were rounded up, dashing the hopes of Morsi and other detained Brotherhood leaders who hoped the unrest would break the army's grip.
Morsi was charged in connection with the deaths of about a dozen people in clashes outside the presidential palace in December 2012 after he enraged his opponents with a decree expanding his powers.
His son Osama told Reuters on Monday that he was in good spirits, defiant despite relentless pressure from security forces, judges and a media that demonises Islamists.
ISOLATED IN JAIL
Morsi has largely disappeared from public discourse in Egypt, where just a public mention of the group can be risky as it means remembering the deadly crackdown after his overthrow.
"There is nothing positive that can come out of thinking about Morsi," said Shadi Hamid, a fellow at the US-based Brookings Institution, who has written a book on Islamists and the Arab Spring uprisings.
"It can only lead to dark, negative thoughts. That goes not just for Egyptians but for the international community, for the United States, for Europe."
Cairo has defended its actions against protesters, saying they were given the opportunities to disperse peacefully and that Brotherhood militants initiated the violence. It says all defendants are given a fair trial by an independent judiciary.
At his first court appearance in November 2013 Morsi shouted "Down with military rule" and he still, at least publicly, says that will happen.
A senior Brotherhood official with channels to leaders in prisons and new ones outside said the group had no interest in any reconciliation with the government.
"We will never ever negotiate," said the official by telephone.
Morsi, who has a doctorate from the University of Southern California, only entered the presidential race in 2012 late in the game after the Brotherhood's preferred candidate Khairat al-Shater was disqualified on a technicality.
The son of a peasant farmer, Morsi grew up in a village in the Nile Delta province of Sharqia. His year-long tenure broke a line of leaders from the armed forces, which had provided every Egyptian leader since the overthrow of the monarchy in 1952.
Some Brotherhood youth no longer look to the old generation for guidance, raising the possibility they will lose patience and take up arms.
Morsi remains significant as a political symbol for the Brotherhood, the Brookings Institution's Hamid said, but his likely years of entanglement in Egypt's legal system has complicated the future of the group.
"It is not even so much about the man himself but what he represents and he represents the Brotherhood's continued claim of legitimacy," Hamid said.
This has made it difficult for them to move on after Morsi's detention because it would mean turning away from the person who represents their democratic mandate, he said.