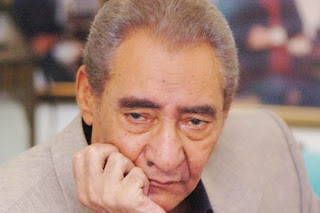 What makes a good bard? Unleashing the inner passions, or perhaps drawing out the ambivalence of contemporary society. The iconic poet Abdel-Rahman Al-Abnoudi passed away in Cairo aged 77 after a long battle with illness. His stirring Al-Mawt ‘ala Al-Asfalt (Death on the Asphalt) was nominated as one of Africa’s most significant books of the 20th century at the 2001 Zimbabwe International Book Fair.

The sharp storytelling of the minstrel has metamorphosed into a salient feature of contemporary Egyptian lore.

Al-Abnoudi was a political activist as well as a poet and a creative writer. Before his death, he gave President Abdel-Fattah Al-Sisi some sage advice. Two prescriptions stand out: “Free the incarcerated Revolutionary Youth [of the 25 January Revolution, 2011] and jail us and judge us [the elders] instead”. He also urged Al-Sisi to stand by the poor and the disadvantaged.

Al-Abnoudi was sometimes publicly castigated by his detractors for championing Al-Sisi, but he did not mind being open to criticism, it was part of his even-tempered and self-possessed personality and also his public persona.

In turn, Al-Sisi praised him as “a statesman”. He often acted like something of a Dutch Uncle. He believed that the super-rich, the capitalist tycoons and the oppressive authorities must have their day in court.

As a patriot he was delighted by the inauguration of the New Suez Canal last August. He was likewise enthused by the opening of a museum in his hometown of Abnoud in the governorate of Qena, Upper Egypt.

Al-Abnoudi wrote the script and the songs that featured in Tawq wa Eswera (Collar and Bracelets), and Al-Baraei (The Innocent) two classics that tackled prickly social and political questions and won him numerous accolades.

Adda Al-Nahar (The Morning has Passed) was a poignant reminiscence of a particularly testing time in Egypt’s history.

It was an anecdote, a narrative of the agony of the age. He wrote the poem after the defeat of Egypt by Israel in 1967, and the revered singer Abdel Halim Hafez sang the hallowed poem in a heart-piercing song that still triggers the deepest sentiments and nostalgia of Egyptians to this day.

He wrote and recited his poetry in the colloquial, coarse vernacular of the Upper Egyptian dialect, and hardly ever in the classical Arabic of the Quran.

He was a free spirit. After he divorced film director Attiyat Al-Abnoudy, he married Nehal Kamal. He eschewed the standard verse style of classical Arabic poetry. His was the people’s poetry.

He penned the lyrics of Arab iconic singers such as Lebanon’s Sabah, Abdel-Halim Hafez, Warda Al-Jazairia, Mohamed Mounir, and Majda Al Roumi. Among his most memorable lyrics sang by the legendary singer Abdel-Halim Hafez were My Love is my Passion (Al-Hawa Hawaya), The Morning has Passed (Adda Al-Nahar), The Morning has passed (Adda El Nahar), and The Christ (Al-Maseeh). Al-Abnoudi also wrote the lyrics of Nubian superstar Mohamed Mounir’s catchy lullaby Chocolate (Shokolata), and My heart doesn’t seem like me (Alby Mayshbehnish); Egyptian diva Shadia’s impassioned love song Oh You with the Dark Complexion (Ya Asmarany al Loon); Sabah’s celebrated Sometimes (Saat Saat) or Majda Al-Roumi’s From Beirut (Min Bairout), and I love you Egypt (Bahoaki Ya Masr).

The list of Al-Abnoudi’s lyrics is endless. He was proud of his humble beginnings, and the abject poverty of his childhood left an indelible mark on his mind.
Al-Abnoudi is survived by his widow Nehal Kamal and his two daughters Nour and Aya