The Ministry of Antiquities’ decision to remove artefacts unearthed on the site of Al-Abd Theatre in Alexandria and hand the land over to its original owner triggered a controversy. Nevine El-Aref reports 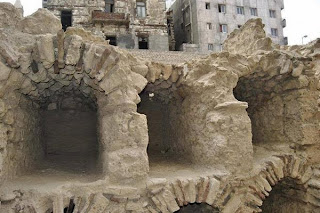 Archaeologists differed with the Ministry of Antiquities over a site known as Al-Abd Theatre overlooking the Mediterranean Sea in Camp Shizar, Alexandria. The site was discovered in 2013 during excavation works carried out by the ministry on the request of the Al-Abd Theatre owner. According to Antiquities Law no 117 of 1983, the Ministry of Antiquities is the principal authority in charge of approving the construction of new buildings on any land in Egypt after inspecting it for archaeological value.

Excavations went as far as  eight metres underground, uncovering a collection of Roman and Hellenistic objects including rock-hewn catacombs, statues, columns, vases and vessels. But, regretfully, an archaeologist speaking on condition of anonymity said the residents nearby complained that it threatened the architectural stability of their buildings. “The technical report said the depth of the excavations undermined the surrounding buildings and recommended closing the site.” One resident, Mustafa Hussein, complained after he noticed cracks appearing in a neighbouring building.

In March 2015, the source said, the archaeological committee that supervised the excavations sent its official report to the Permanent Committee for Ancient Egyptian Antiquities in order to take the suitable decision whether to relocate the newly uncovered objects to another location and give the land to its owner or declare the land an archaeological site under the umbrella of the ministry and recompense the owner.

When the report was submitted, he said, the Permanent Committee decided to remove the authentic objects and return the land to its original owner who in his turn partially filled the site with sand after the artefacts were removed. “The site was evacuated and archaeologists took some of the artefacts that can be moved to the museum and left the rest, which are cracked and are difficult to restore.” It was this course of action that triggered a ferocious debate between archaeologists and the ministry.

The Facebook group Egypt’s Heritage Task Force posted photos of the site before and after it was destroyed, commenting, “The site was excavated and documented, and the Ministry of Antiquities now wants to cede the land to a contractor so he can build over it.” It called on the ministry and all stakeholders to retract a decision that will lead to the loss of an important part of endangered Hellenistic history in Alexandria.

Gharib Sonbol, the Head of the Central Administration for Preservation and Restoration at the ministry, called for sending an immediate report to the Prosecutor General to investigate the incident, describing it as “a black day in Egypt’s archaeological history.”

Sonbol said that when he went to Alexandria a week ago to inspect some restoration works in Kom Al-Shoqafa, he paid the Al-Abd Theatre a visit to find out what was going on. Arriving there, Sonbol continued, he found a collection of unique Roman and Hellenistic catacombs that have been never found before. He explained that, rather than being carved into the rocks like those of Al-Wardiyan and Kom Al-Shoqafa, these were constructed on two levels.

“As an Egyptian citizen keen on his country’s heritage I photographed the site, put the photos on CD and sent it along with a report to the Minister of Antiquities Mamdouh Eldamaty,” Sonbol pointed out, adding that the site has been completely damaged. “This site could be one of the most important archaeological sites in Egypt,” he insisted.

“If this second committee finds that the site still contains monuments and suggests their removal the suggestion will be submitted to the next meeting of the Permanent Committee scheduled next week to give its final decision,” Eldamaty declared, explaining that if these monuments are catacombs they will be dislodged and removed to another secured location in order to preserve and protect them.

“Such a removal would be another salvage operation but this time for Hellenistic catacombs,” Eldamaty pointed out, confirming that the Tagran catacombs on Port Said Street were similarly relocated to Kom Al-Shoqafa and the Al-Wardiyan catacombs to the Graeco-Roman Museum.

He also said that an administrative investigation is to take place to find out who is responsible for the previous committee’s inaccurate archaeological report if it is so deemed.

A day after the start of the second inspection committee’s work, Afifi said the site is partly covered with sand as the depth of the excavation work has threatened the neighbouring building. He added that the remains of the monuments could be seen but could not be clearly identified underneath the sand. The committee, Afifi added, suggests re-excavating the site and removing the archaeological remains to a more secured location, handing the land over to its original owner.

Before starting the excavation, Afifi said, Abul Ela suggested building walls around the Al-Abd Theatre site to support the land and separate it from neighbouring buildings in order to prevent possible damage.

“All suggestions will be written in an official report that can be submitted to both the Minister of Antiquities and the Permanent Committee in order to take proper action,” Afifi said.