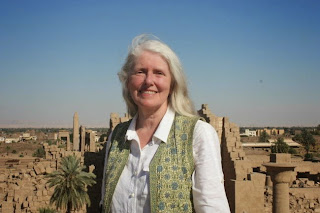 The well-loved Egyptologist with Royal Ontario Museum was of course the woman who identified that peculiar Egyptian mummy in the old Niagara Museum back in the 1990s as none other than Pharaoh Ramses I, and helped to get him back to Egypt.

Now, on the eve of her retirement from the ROM, she returns to Niagara for a special travel and history talk, Sunday, April 26, at Konzelmann’s Estate Winery. The event starts 2 p.m.

The internationally-renowned mummy and coffin expert has starred in numerous history documentaries over the years, including Museum Secrets, Nova: The Mummy Who Would be King and last year’s BBC One program Tutankhamen, the Truth Uncovered.

Her name also made the news this past fall when she discovered the name of a female mummy — Nefer-Mut (a.k.a. Justine) — who had lain unidentified in the ROM museum vaults for decades.

Breathing life into the ancient Egyptians is what Gibson does best. A consummate storyteller, she has inspired tens of thousands of public school students, late life learners and history lovers over a quarter-century of lectures, interviews, classes and TV appearances.

Born in east Toronto 67 years ago, she remains a radiant lady who continues her lifelong love affair with Egypt — a subject, she confesses, gripped her at a very young age.

“I used to go down to the ROM every weekend and walk around until my feet were bleeding,” she says. “I would sit on the floor and copy all the hieroglyphs off the wall. I remember one really thrilling day as a young teenager when I found the name Metjetji and realized I could actually read a little bit.”

Surprisingly, she was deterred from her dream profession by a guidance counsellor who dismissed it as ‘stupid’ and not something that could ever make her a living. Instead, she

went on to become a drama and high school teacher for Chatham-Kent, York, North York and Toronto boards of education.

It was only after her son was born that she rediscovered her true calling and returned to University of Toronto to attain a master of arts degree in Egyptology as a mature student.

“I thought if I was good, the museum just might let me dust the coffins or something.”

But that’s all history now. After almost 25 years as the ROM’s most popular teacher, she is immensely proud of the institution and its many contributions to historical preservation, study and education.

“The ROM was one of the first museums in the world to take the study of mummies very seriously,” she says. “The mummy of Djedmaatesankh was one of the first to get a proper modern CT scan — and we are now continuing that work with other mummies who are more obscure but I think deserve the attention just as much.”

Finding Ramses I at Niagara Falls

Gibson also lights up at the mention of another museum close to her heart.

“I used to go to Niagara every year to see this astonishing old museum. It had an amazing collection with rare fossils, Samurai armour and these rare animals and birds preserved more than 150 years ago, many of which are now extinct. There was also a mummy there that I often wondered about.”

“He looked like a member of Ramses the Great’s family, and the more I studied him, the more I thought he might really be a royal person. I began to call him ‘Ramses for luck.’

Gibson turned her interest in the mummy’s origins into a lecture and an article for KMT, the Journal of Modern Egyptology, suggesting he was most likely a Ptolemaic priest but supporting the possibility he could be Ramses I.

When the Niagara museum was sold in the late 1990s, Gibson was consultant to the buyer William Jamieson and helped sell the coffins and mummies to the Michael C. Carlos Museum of Emory at Atlanta. It was in Atlanta that the positive identification of the mummy as Ramses the I was made, and the great Pharaoh was triumphantly returned home to Luxor.

Gibson will pay her respects to Ramses during her January 2016 tour to Egypt. With more than 20 trips to the Egypt under her belt, she is certain April 26 to bring an insider’s view of all the pyramids and temples, along with the rarely-visited sites of Middle Egypt.

“Ancient history helps open up the world to us,” she says. “These ancient people managed quite well without iPhones and computers, writing wonderful poetry and building nifty things like pyramids … So I think they remind us that the human race is bigger and more interesting than our little lives here in Ontario.”

For more details on Gibson’s A Taste of Ancient Egypt talk at Konzelmann’s or her 2016 Egypt tour, visit ancientegyptalive.com or e-mail anna@yourjourney.com.