For when your head feels like someone's pulling your brain out through your nose: 1,900-year-old papyrus reveals ancient Egyptian cure for a hangover

By Richard Gray for MailOnline

For most people a hangover will have them reaching for the painkillers and greasy breakfast, but those living in ancient Egypt had a rather different approach.

Historians have discovered a 1,900-year-old hangover cure written on an ancient Egyptian papyrus.

Written in Greek, one of the medical recipes offers advice for how to tackle a 'drunken headache' - with the leaves of a shrub called Alexandrian chamaedaphne, or sometimes Alexandrian laurel.

The text recommends stringing the leaves of the evergreen plant, also called Ruscus racemosus, together and possibly wearing it around the neck. 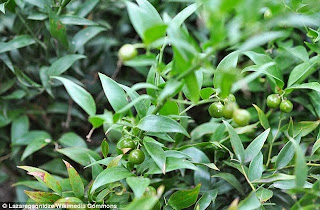 Alexandrian chamaedaphne, sometimes called Dane racemosa (above) was recommended as a cure for hangovers in Egypt 1,900 years ago by stringing the leaves in a garland that was hung around the neck

While the text recommends this as a way of relieving headaches brought on by alcohol, it is not known if it had any effect.

The treatment was discovered as part of an ongoing effort to translate the Oxyrhynchus papyrus - more than 500,000 documents found at the ancient Egyptian town of Oxyrhynchus, about 100 miles south of Cairo.

Oxyrhynchus lies south west of Cairo and is considered to be one of the most important archaeological sites in Egypt.

It has yielded a huge collection of papyrus texts from the Ptolemaic and Roman periods of Egyptian history and among them are fragments of plays and the Gospel of Thomas.

The city was built around a system of canals and inhabitants dumped their rubbish at nearby sand hills, including lots of written material as Oxyrhynchus was governed bureaucratically by the Greeks and the Romans.

In 1896, two young excavators - Bernard Grenfell and Arthur Hunt - from the University of Oxford began to excavate the site and combed through the rubbish.

While they were concerned with finding works of high literature, they realised the importance of the discarded everyday material.

Some 500,000 papyrus fragments are now kept at the university's Sackler Library; among them the account of match fixing.

The hangover treatment was one of 24 new medical texts that are the latest to be translated - the 101st volume of translations to be published.

Among the documents, researchers at the University of Oxford and University College London have found 11 versions of known medical texts by Galen and Hippocrates alongside the new medical texts.

They also found four documents that appeared to be doctors notes.

Professor Vivian Nutton, a historian at University College London who was one of those taking part in the translations, said: 'It is the largest single collection of medical papyri to be published.'

The papyrus were discovered during excavations at Oxyrhynchus in 1890 by Bernard Grenfell and Arthur Hunt from Queen's College at the University of University.

Around 10 per cent of the papyri have been found to be literary and many are private documents, codes, registers, official correspondence, tax records, bills, leases, horoscopes and inventories.

The papryi are owned by the Eypte Exploration Society and kept at the Sackler Library at the University of Oxford.

The medical documents all date from the first century AD to the sixth century AD.

It is thought the hangover cure may have been necessary as many ancient societies drank wine rather than water, which was unsanitised.

The newly translated medical texts also include recipes for helping to halt the spread of ulcers, others for treating hemorrhoids, toothache, gangrene and a dozen for treating eye conditions. 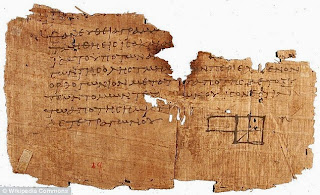 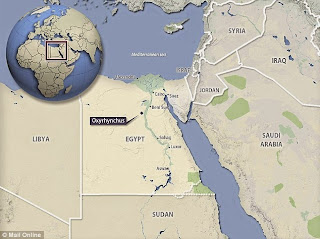 The documents were found at the ancient town of Oxyrhynchus, in Egypt around 100miles (160km) form Cairo 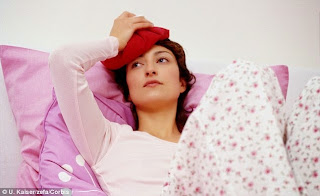 Ancient Egyptians would did not have modern hangover cures and used strings of leaves instead, according to new translations of 1,900 year old texts found at Oxyrhynchus in Egypt. Image above posed by a model

Another gruesome text explains the technique for eye surgery to treat someone whose eyelid had turned inside out.

It says: 'the eye... i began... by the temple... the other from the temple... to remove with a small round-bladed knife... the edge fo the eyelid from outside... from within until I scooped out.'

ANCIENT EGYPT HAD ITS OWN VERSION OF THE NHS 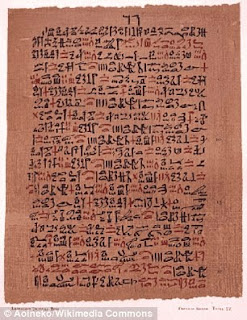 The longest medical papyrus ever found is the Papyrus Ebers (pictured). It contains more than 800 treatments for eye problems to digestive disorders

Texts found on the site of Deir el-Medina identify a workman on the crew designated as the 'swnw', or physician.

The physician was given an assistant and both were allotted days off to prepare medicine and take care of colleagues.

This physician would have most likely treated the workmen with remedies and incantations found in his medical papyrus.

These texts acted like a reference book for the ancient Egyptian medical practitioner, listing individual treatments for different ailments.

The longest of these ever found is called Papyrus Ebers and contains more than 800 treatments covering eye problems to digestive disorders.

The source of the papyrus is unknown, but it was said to have been found between the legs of a mummy in the Theban necropolis.

A suggested treatment for a condition that had symptoms similar to asthma is listed as a mixture of herbs heated on a brick so the sufferer could inhale the fumes.

Another treatment, this time for intestinal worms, required the physician to cook the cores of dates and a desert plant called colocynth together in sweet beer.

He would then have sieved the warm liquid and gave it to the patient to drink for four days.

While smearing a paste of dates, acacia, and honey to wool and applying it as a pessary would be used as a form of contraception by the worker's wives.