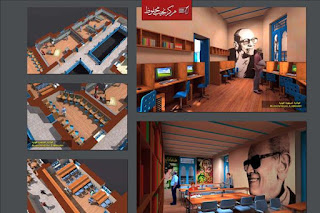 After years of dispute between the ministries of antiquities and culture, the Tekkeyet Mohamed Beik Abul-Dahab in Historic Cairo is to be converted into a museum honouring renowned Egyptian writer Naguib Mahfouz, the first Arab writer to win the Nobel Prize for Literature.

Mahfouz, who died at the age of 95, was one of the first modern Arab writers to explore existentialist themes. He published 34 novels, more than 350 short stories, dozens of movie scripts and five plays. Many of his works have been turned into films.

His most famous work is the Cairo Trilogy, made up of Bayn Al-Qasrein (Palace Walk), Qasr Al-Shouq (The Palace of Desire) and Al-Sukkariya (Sugar Street).

The Trilogy is one of the works from Mahfouz’s literary career that the Nobel Committee cited in awarding him the prize in 1988. It depicts three eras in Cairene socio-political life, providing a microcosm of early 20th-century Egypt, through the life of a wealthy Cairo merchant and his family over three generations.

The controversy over the location of the Naguib Mahfouz Museum started four years ago when the then culture minister announced during the celebrations to mark the centenary of Mahfouz’s birth that the museum would be established in the house where the writer was born, in Al-Gamalia in Historic Cairo.

However, the house was in poor condition, so the Ottoman Tekkeya of Mohamed Beik Abul-Dahab was selected instead.

The head of the Cultural Development Fund, Mohamed Abu Seada, told Al-Ahram Weekly that, after years of debate, former prime minister Ibrahim Mehleb has agreed that the ground and first floors of the building will be dedicated to the museum and a creative centre, while the second floor will be used as offices for the Ministry of Antiquities.

He said that since the agreement, the Ministry of Culture has started to prepare the building to host the museum’s collection.

Abu Seada said that the ground floor will house a library displaying books by Mahfouz, together with reading and lecture halls and a workshop area. A bookstore selling Ministry of Culture publications will also be provided.

The first floor will display the private collection of Mahfouz, including his awards and honorary certificates and some of his private objects, such as clothing, glasses, pens, papers and letters, he said.

“The museum will be a cultural lighthouse in historic Cairo,” Culture Minister Helmi Al-Namnam told the Weekly. He added that the museum will house the private library of Mahfouz, which was given to the ministry by his family.

The Tekkeyet Mohamed Beik Abul-Dahab is located in Al-Azhar Street, facing Al-Azhar Mosque, and is a complex dedicated to Abul-Dahab. It includes a mosque, mausoleum and sabil-kuttab (water fountain and Qur’anic school).

The Tekkeya was designed to host Sufi travellers and students and to serve as a place of spiritual retreat and contemplation.

Abul-Dahab was a prominent Mameluke of Ali Beik Al-Kabir and played a major political role in the period from 1772 to 1775. He supported Ali Beik in his attempt to extend Mameluke rule but afterwards revolted against him. In 1775, Abul-Dahab died in a battle against the forces of the governor of Acre in Palestine.

Mohamed Abdel-Latif, head of Islamic and Coptic Antiquities at the ministry, said that the Tekkeyet Abul-Dahab was distinguished by an architectural style different from the other tekkeya of the time. It has an open courtyard with a fountain and a garden; three-storey structures are set around the courtyard.

The Tekkeya Abul-Dahab underwent a six-year restoration as part of the Historic Cairo Rehabilitation Project, which began in 2000.

Abdel-Latif said that the restoration work included consolidation of the building itself, repair of cracks that had spread on the walls, cleaning and installation of a new lighting system.