Posted by Gemma Ellen Wood on August 19, 2015 in Egyptomania 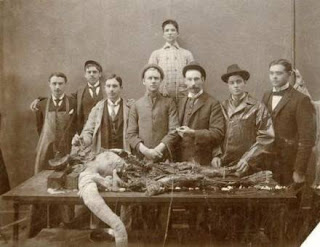 This week we are examining a seemingly shocking trend of the Victorian era: mummy unwrapping parties.

At one point, tourists could buy mummies from street sellers in Egypt and, during the 1830s and 1840s, mummy unwrapping parties became a popular pastime of the upper classes of society. Modern opinion often view these ‘parties’ as an after dinner spectacle where the mummies were laid out in the parlour ready to be unwrapped for the dinner guests. 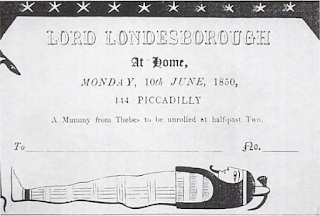 Any amulets found in the wrappings would be give to the guests as souvenirs and, as a result, invitations to these parties were highly sought after.

But was this entertainment or scientific study? Accounts of Lord Londesborough’s event (above) indicate that many of the guests were members of the Society of Antiquaries – this was more of a lecture than a party.

Most of the events that we know of took place in lecture halls and universities. 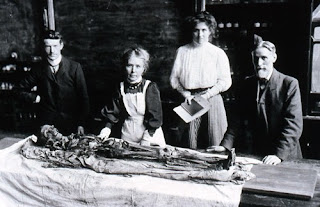 We know now that unwrapping mummies can be incredibly damaging. Modern technology such as x-rays and scanning can reveal the contents of a mummy’s wrappings without the need for unwrapping.

The British Museum’s ‘Ancient Lives, New Discoveries’ exhibition showed how non-intrusive techniques can reveal so much more about not only the contents of the wrappings, but the lives of the individuals as well.

You can watch a video about the exhibition here: https://www.youtube.com/watch?feature=player_embedded&v=NUMoVXN8PsM