Egypt’s Nile River Delta Is Sinking Into the Sea 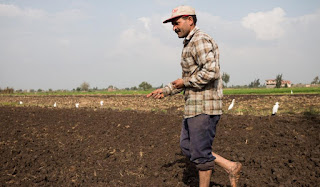 Abdullah Salam walks in his field, spreading wheat seeds for the winter season. Farmers like Salam in Egypt's Nile Delta are struggling with lower crop yields as the nearby Mediterranean rises and increases the soil's salinity. One acre used to yield three tons. Now it yields barely over half that amount. Nicholas Linn for Newsweek
Filed Under: Tech & Science, Egypt, Climate Change, Sea Level Rise

Abdullah Salam walks up and down his narrow plot, tossing fistfuls of wheat seeds with a light flick of his wrist as the soil squishes beneath his bare feet. "Elhamdullillah," he says—praise God—a strong rain just came through and softened the ground. A month ago, this earth was as hard as asphalt.

These days, it feels to Salam like his soil is fighting him. It's quick to dry out, turning hard and gray. The seeds don't seem to like it: No matter how much money he spends on fertilizers, he's getting slightly lower yields every harvest. And no matter how much he irrigates the land, it's always thirsty. Always.

But there's nothing to be done about it, and there's no one to complain to here in Kafr el-Sheikh, in the center of Egypt's Nile Delta, so Salam carries on planting. He, his wife and his 15-year-old son, Mohammed, scatter the wheat seeds around his 2-acre field. Their neighbor then drives his tractor through it, tilling the soil and pushing the seeds deep into the ground. Once that's done, they all have tea and wait.

"The harvest will be in five or six months, inshallah [God willing]," Salam says. "One [acre] used to yield 18 or 20 ardab [worth about $1000]. But now we'll probably only get 10." Salam will sell half of that at market for about $250, and the other half his wife will mill into flour and bake into bread. But it's nearly impossible to make such a small amount of flour stretch until the next harvest, she says.

This land, where the Nile spreads out to meet the sea, once grew enough wheat to feed everyone from Cairo to Rome—the breadbasket of the world, they called it. Today, the delta barely feeds the farmers who cultivate it. Salam blames his diminishing returns on rising fertilizer prices and bad luck.

But it's not bad luck—it's the sea. It's warming, rising and expanding onto the low-lying, delta lands and seeping into the water that feeds them. By the end of the century, 60 percent of the delta region—including Salam's field—will be so saturated with salt as to be barely farmable. As much as 20 percent of this once-fertile land will be covered in water. When this happens, two-thirds of Egypt's food will drown and two-thirds of the country's population will be left homeless and hungry.

Sadek Mahmoud has been working the plot next to Salam's for 65 years. He remembers when the Nile used to flood his irrigation canals every year with clear, nutrient-rich water. "I used to drink from the Nile right here. And I never ever got sick," Mahmoud says.

For centuries, farmers relied solely on the Nile to water their cropland, digging a complex network of irrigation canals to connect the entire delta region to the river and its tributaries. But as Egypt's population has soared, so has its water consumption; and as factories, power plants and megacities have emerged along the Nile's banks, the clear, rich water of Mahmoud's youth has been fouled by all manner of human, chemical and industrial waste. Nowadays, by the time the Nile reaches Salam and Mahmoud's fields, it has been reduced to a brown, toxic trickle.

To compensate, the farmers in the area have dug a well. Salam and Mahmoud, along with about a dozen of their neighbors, take turns running a fuel-powered pump to flood their respective irrigation canals with water from the Nile Delta aquifer, a massive underground reservoir, spanning from Cairo to the Mediterranean Sea.  On the surface, this seems like a good solution to the delta's water shortage problem, but this sort of pumping is accelerating the region's demise, according to Badr Mabrouk, a hydrology professor at Zagazig University. "When you draw the water up from the deep aquifers, it creates pressure and it draws the sea in," Mabrouk said.

Rising sea levels had already put the Nile Delta aquifer in peril before farmers began deep-well pumping, Mabrouk explained, but they have made it worse. The way coastal aquifers work is that they meet and hold back the sea underground at a point called the transition zone: The higher density saltwater sinks and gets pulled back toward the ocean and the freshwater remains on top. As long as sea levels—and aquifer levels—remain stable, this meeting point doesn't move.

But if either the sea rises or the fresh water recedes, this point moves farther inland: The sea advances underground. In the case of the Nile Delta, both are happening and they're happening quickly, Mabrouk said. As the ocean warms and its waters expand, sea levels in Egypt are rising, and the land is sinking at a rate of 0.1 inches per year as a result, according to the Climate Change Adaptation in Africa Program. Meanwhile, excessive pumping is draining the aquifer faster than rainfall can refill it. 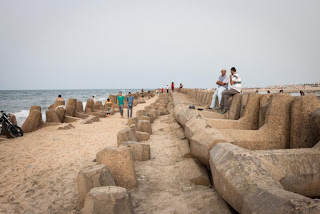 Massive cement tetrapods lie along the beach in Baltim, on Egypt's Mediterranean coast. The huge blocks are a stopgap to prevent erosion, but the sea is steadily overtaking them. The first stages of this wall have been almost completely overtaken by sand; only their moss-covered tops remain visible. Without action, the other rows will soon disappear as well. Nicholas Linn for Newsweek

Climate scientists and geologists have been warning of the danger of saltwater intrusion in Egypt's Delta for decades. But in a country riven with political upheaval and economic insecurity, the environment has never been the government's priority—and still isn't, according to Hassan Husseiny, a water management specialist for the American University in Cairo's Research Institute for Sustainable Environment. "Studies say climate change could begin to have a real effect after 20 years," Husseiny says. "The government doesn't look that far ahead."

But up in the northern Delta region, sea-level rise is no longer a matter of looking ahead: On a daily basis, the sea is pounding away at the populous cities of Alexandria, Damietta and Port Said. If the sea rises by even 20 inches (which a 2014 National Climate Assessment projects will likely occur by 2100) 30 percent of Alexandria, a city of 5 million, will be inundated.

In the popular coastal resort town of Baltim, about 30 miles north of Kafr el-Sheikh, mango farmer Mossad Abu Ghali has seen the sea advancing. "I remember when they had to build a new boardwalk because the old one got ruined by the sea," Abu Ghali says. "That was a long time ago though. Inshallah, the sea is not advancing anymore." Baltim built a seawall in 1992 out of large, concrete tetrapod blocks. This has slowed—but not stopped—the sea's advance. This type of structure, known as a revetment, has an average life span of 30 to 50 years. Already the wall is half-buried in sand.

All along the coast, cities and towns like Baltim have constructed sea walls to try and hold back the water, but even with these measures in place, Husseiny predicted that no fewer than 10 million people would be displaced in the next 30 years.

In 1972, Egypt launched the Coastal Research Institute (CORI) to "monitor and protect" the Egyptian coast, but to date, its work has focused far more on monitoring than protecting. "There has yet to be any action taken in the delta that I know of," Husseiny said. "There have been conferences and meetings and discussions but no action."

The institute's current flagship program is a joint venture started in 2009 with the United Nations Development Program and Global Environment Facility. The project is to create "integrated coastal zone management systems" on Egypt's coasts by building sea barriers out of natural materials. Six years and $4 million later, they have managed to "select a pilot site," design an "adaptation technique" and solicit bids from contractors to work on a pilot site—but have yet to build a single sea barrier.

Aymen el-Gamal, CORI's deputy director, works out of an office less than half a mile from the sea, and he doesn't deny the sea levels are rising. But, he says, there is little use in trying to predict the rate at which it will rise—and there's no sense in planning more  than one or two years ahead. Most existing models are just alarmist and unhelpful, el-Gamal says. He's also unconvinced human-induced climate change is real. "The Earth is very clever. It can take in energy and emit it," el-Gamal says. "There are those who say there is the greenhouse effect and the ozone—no, the Earth is bigger than all of this." His smile is confident and kind. "So the climate change from my point of view is a normal phenomenon." Which is why he sees his role as one of simply monitoring sea-level rise and adapting to the data as it comes in.

For farmers like Salam, Mahmoud and Abu Ghali, however, that won't work. The hour is late for the delta. "The land is slowly, slowly running out of time," Mabrouk said. Egypt's primary food source is sinking into the sea while its government—and the international community—watches on.

Global leaders are gearing up for the landmark COP21 climate change summit in Paris, where they are hoping to reach consensus on a new set of regulations for greenhouse gas emissions to replace the current Kyoto Protocol when it expires in 2020. But even the most aggressive of global reforms won't do a thing to save Egypt's Nile Delta. Even if global leaders succeed in their goal of limiting global warming to 2 degrees Celsius above preindustrial levels (an ambitious goal to begin with), the seas are expected to continue rising for decades to come, according to a report by the National Oceanic and Atmospheric Association.

Land loss and damage from climate change are on the agenda for the summit, but it's unlikely that Egypt's case will be discussed specifically. Ultimately, the United Nations Framework for Climate Change has left it to individual countries to develop their own National Adaptation Plans. Egypt's prime minister formed a National Committee on Climate Change in July to draft an up-to-date national strategy for combatting the problem, but a copy of this strategy has not been made public (if indeed it has been fully drafted).

In the meantime, there has been little if any international pressure on Egypt to update its national strategy expediently. All international critiques of Egypt tend to focus on the country's national security problems, human rights abuses and poor democratic governance. As long as climate change remains a second-tier issue for the international community, the Egyptian state—and its people—will also regard it as one.

Even Abu Ghali, whose mango trees could be floating in saltwater within his lifetime, believes tackling climate change should come second to tightening security and restoring the economy. He has full confidence his president will help him in due time. "The government is under a lot of pressure," Abu Ghali says. "We can't expect everything to come all at once. [President Abdel-Fattah ] el-Sissi needs to first give jobs to people who need them. Later, he will help us." Inshallah.

Partial funding for this piece was provided by the Earth Journalism Network.