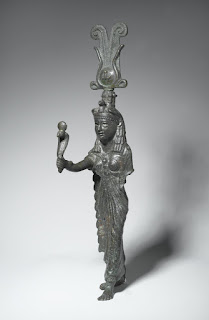 “Why is Isis dressed different from the other figures?”

Visitors have a lot of questions about Ancient Egypt. As a concept, it is something that everyone has at least heard of, but there are a lot of different aspects to know about and a lot of things that even scholars still do not know. One recurring theme in questions is that of clothing, jewelry, and headdresses. Headdresses are especially interesting because there are so many different types. One place you can see examples of several types is a case in the Brooklyn Museum’s Egyptian galleries of 23 small objects, mostly cast in bronze, a rare material to have survived from Ancient Egypt.

In this case is a figure that looks out of place in an Egyptian gallery: a woman dressed in Roman clothing. But if you look at her closely, she is holding a uraeus in her hand which is, itself, topped with a Re disk, a symbol of the sun god. Her hair is also Roman in style, but on top of her head is another Re disk surrounded two more uraei as well as two feathers, all together a type of Egyptian crown. She is covered in typically Egyptian symbols. This combination of Roman style and Egyptian iconography—especially the crown—means that she is a depiction of the goddess Isis-Fortuna, a quintessential symbol of the confluence of the two cultures during the time that Rome ruled Egypt.

In fact, Rome was not the first outside power to control Egypt and, similarly, not the first to assume Egyptian traditions. There were Persian, Nubian, Greek, and Roman pharaohs. Fascination with Egyptian art and culture is common to people across time and place from foreign pharaohs, to the erection of obelisks in Europe, to Egyptian Revival architecture in the 19th century, to the popularity of museum collections today. The next time you participate in this tradition and visit the Egyptian galleries, look for how figures are identified as individuals or by status, and remember, the answer is often in that hat.