Six years after its discovery on Luxor's west bank, the statue of the New Kingdom’s King Amenhotep III is to be transported to the GEM next week 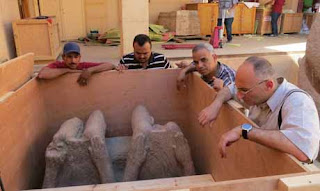 Tawfik and Zidan during the packing of the duo statue

At Kom Al-Hittan area, where the ruins of King Amenhotep III’s funerary temple stands on Luxor's west bank, workers and archaeologists are busy restoring the colossal statue of King Amenhotep III. This statue is to be packed and transported to Cairo for restoration next week in order to be put on the planned grand staircase of the Grand Egyptian Museum (GEM) overlooking the Giza plateau. 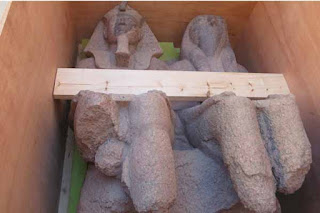 Director General of the GEM Tarek Tawfiq told Ahram Online that the statue was discovered within the ruins of the temple in 2009 by an Egyptian archaeological mission. It depicts King Amenhotep III with the ancient Egyptian god Ra-Harakhti with a human body and a falcon head. The statue is partly deteriorated with missing legs. He described the statue as "very distinguished" because it depicts the king in equal size to the god.

"This is the biggest statue to be transported to the GEM after the transportation of the King Ramses II statue, which was on display at Ramses Square in downtown Cairo," Tawfik told Ahram Online. He went on saying that Amenhotep III's colossus is to be transported next week to GEM's conservation lab where it will be subjected to restoration and kept in storage until the opening of the GEM.

He explains that the Grand staircase will put on show 100 artefacts that reflect the kingship in ancient Egypt. Among these objects are a granite column from king Sahure temple in Saqqara as well as other reliefs and architectural elements. 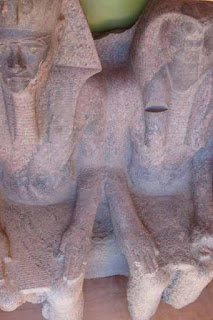 Restoration and Packing Director General at the GEM Eissa Zidan told Ahram Online that two black granite statues of the lioness war deity Sekhmet are to also be transported from Luxor to Cairo. These statues were discovered at the ruins of King Amenhotep III temple on Luxor's west bank as it was among the temple's decorative items. Both Sekhmet statues would be exhibited at the GEM Grand Staircase.

Zidan pointed out that restoration work on King Amenhotep III’s colossus will start immediately after its arrival from Luxor and it would be mounted and cleaned. A new mounting to hold the colossus will also be created.

Osama Abul Kheir, director general of restoration work said that the three statues are now covered with non-acidic foam to protect them during their trip to Cairo and then inserted in wooden boxes for transportation.