The director of Vienna's Art History Museum (KHM) Sabine Haag handed over on Monday a priceless Egyptian statue to the Egyptian ambassador after it was recovered from two suspected antiquity thieves earlier this year.
The statue had featured in a trial in September in the Innsbruck regional court, after two men were charged with receiving stolen property.
The pair were offering the statue for sale at two million euros ($2.14 million), claiming that they had found it in a flea market in the Tyrolean town of Völs.
The statue, known as an Uschebti, was handed over to the KHM for authentication, where they confirmed it was more than 2,500 years old.
After determining that no provenance could be found for the statue, it was decided to return it to the government of Egypt, so it was placed in the care of Egyptian ambassador Khaled Abdelrahman Abdellatif Shamaa.
The two men were acquitted during the trial on the charge of receiving stolen goods, but were not allowed to keep the allegedly stolen antiquity. 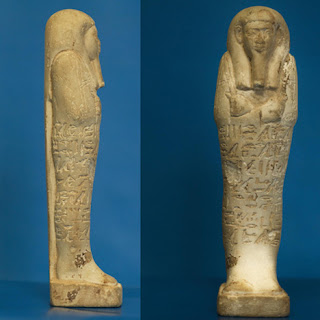