A brisk trade in Egyptian antiquities at Christie's and Bonhams.

Painted wooden Fayum mummy portraits were produced in Egypt for a relatively short time during the Roman period, from the mid-1st century A.D. to the 3rd century A.D. Panels like the two seen here would have been positioned over the head of the mummy and wrapped in place with linen bands. The gilded background immediately surrounding the head and neck of the departed—adding a god-like, eternal glow to the picture, symbolizing eternal life—indicates the extent of the portrait originally revealed by those mummy wrappings. Such portraits are thought to depict the deceased, as they were when they died, so it would seem that we are looking here at two quite young men.

Dated to the 2nd century A.D. and painted in the encaustic technique—a process involving heated beeswax with added colour pigments—the panel in the next accompanying illustration depicts a young man with short curly dark hair, thick dark eyebrows above light brown, almond-shaped eyes, delicate pursed lips and pointed chin. He wears a wreath of applied gold-leaf leaves on his head and is dressed in a dark red tunic and mantle. 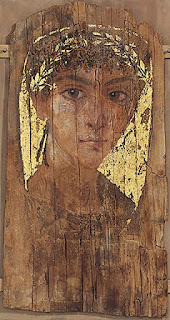 The panel is only 1.5 mm thick and made of wood from a sycamore fig, which is particularly flexible, especially if boiled in water before use. Treated in this way the panel can be curved slightly in accord with the shape of the upper part of the body. In a country where any wood was scarce and expensive, it was the most widely used material, though cypress, cedar, pine, fir and lime were also used.

The painted and gilt wooden mummy portrait of a mustachioed young man  shown next was sold for $68,190 at Bonhams on September 30. The auctioneers thought that it might possibly date to the early 2nd century A.D. and noted that there is a very similar portrait in the Brooklyn Museum that is dated to A.D. 120-130.

Lacking his lower legs and with a dark brown, bitumen-stained surface, but sold for $103,800 at Bonhams on September 30, was a large (16½" tall) wooden figure of Osiris, the Egyptian god of the Underworld and of resurrection and renewal.

A figure dated to 664-30 B.C., it would appear to have been in English private collections for at least a hundred years, and on a label on the back one former owner notes that on first seeing the statue, Sir Ronald Ian Campbell (a British diplomat, who in the late 1940s was British ambassador to Egypt) remarked to his wife, “How strange to come to England and see a real one when Cairo is full of fakes.”

Sold for $139,860 by Christie’s on October 1 was this Egyptian bronze cat coffin of the 26th to 30th Dynasty (664-332 B.C.). On the 15½" long casket of elongated trapezoidal form sits a figure representing the departed cat, its forepaws together and its tail wrapped around its body. The hieroglyphics refer to Bastet, the cat goddess. The coffin would appear to have remained unopened, so presumably it still holds those ancient feline remains. 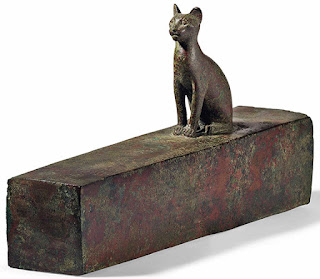